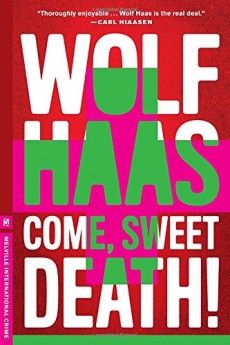 Simon Brenner finds driving an ambulance less stressful than police work, but his boss pushes him back into detection to find out how a competitor is stealing their business.

This is the seventh outing for Simon Brenner, who abandoned his police career when he found criticism from his boss impossible to live with. In an attempt to find a more congenial line of work, he is driving an ambulance in Vienna. He is not initially stirred even when a single gunshot kills two people outside the local sausage stand. But when Junior, head of Rapid Response, directs him to seek proof that their competitor Pro Med is monitoring RR’s radio, his detective skills are reawakened.

As soon as Brenner starts asking questions, he realises that both firms are monitoring each other’s radio, so Junior’s direction seems rather odd. Now that the detective has been set in motion, however, he cannot resist asking a few questions, and soon finds plenty of murky goings-on in the EMT business – and reading competing firms’ radio traffic is the least of it.

In fact the whole business is in reality some distance from the well- regulated and antiseptic organisation one might expect. Another death follows, this time a strangulation of a RR employee who had a recent public sexual encounter with the daughter of a colleague, and the father is arrested. More digging uncovers details of violent past events and a story of competition for finance with horrific implications.

As ever, Brenner is an engaging character, approaching a solution crabwise despite, or with the assistance of, a blizzard of irrelevancies passing through his head. The narrator is privy to those thoughts and the story includes a selection, together with Brenner’s summary of the action, given in a colloquial form somewhat akin to the sort of rambling tale you might expect from a storyteller in a pub, with plenty of cultural references. While the meaning comes across in English, some of the nuances are lost in translation, and there are occasional phrases that read rather awkwardly.

Off-the-wall comments on matters of little relevance to the story can be found on practically every page. Example: the English ‘drive on the left, oversize pool tables, and princes with ears that jut out, there’s a people for you.’  The observations are essentially random with no pretence to depth or connection to the plot, albeit they’re frequently entertaining.

Haas’s idiomatic style may be best appreciated in German, its original language. It may also be that in a part of the world where order is prized, Brenner’s world of licence and rule-breaking provides an amusing antidote. Come, Sweet Death is not to be taken too seriously, but as with other Brenners, the protagonist is appealing, the narrative full of incident, and a great deal of fun.