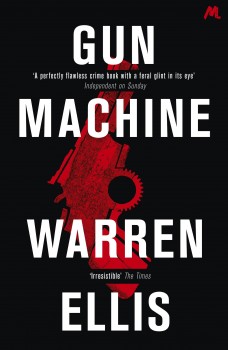 A disenchanted New York detective is jolted into life when his partner is killed and during a search of the murder building he stumbles on a room containing hundreds of guns arranged in a bizarre pattern – each used in a recent killing and each matched with a weapon used in a historic murder.

Warren Ellis made in his name in comics – and it shows in this odd, short and fascinating tale which combines myth with brutality, police procedural with psychological thriller, fast-paced action with historical meandering, features some of the quirkiest characters ever to grace a ‘tec’ and is all set against a background of the constant, random and horrific crimes reported over the New York police radio net.

Disenchanted detective John Tallow stumbles on an apartment in a condemned building, where his partner has been killed responding to a relatively minor incident, containing hundreds of guns arranged in bizarre patterns. Each has been used to kill – but is also a perfect match for a weapon used to commit a historic murder.

Tallow, a single-minded, incorruptible, almost old-fashioned policeman, should be off duty after his partner’s death, but instead is assigned to investigate this warehouse of murder alone. Who wants him to fail and why?

Ellis packs a huge amount of compelling mystery into a small space. The reader must attempt to follow the relationship between the Native American sites and routes of Manna Hatta Island with the streets of modern New York and the strange information pathways of the finance industry.

How does what is, surely, the ultimate in serial killings arise from these connections? What is the killer’s motivation or the point of his strange collection?

Ellis makes his executioner almost sympathetic – his reaction to the loss of his hoard, his self-doubt and his obsession with a far simpler past provoking a sense of societal breakdown as a counterpoint – until one brutal scene emphasises the sheer savagery of the character.

There’s plenty of humour to balance the horror. The relationship between Scarly and Bat, the most dysfunctional and obstructive forensics team ever to appear from CSU, and also between Scarly and her lesbian partner Talia, is cleverly observed.

Lines like that mark Gun Machine as something entirely different; so too his trick of not naming some characters.  ‘The hunter’, ‘the lieutenant’ are reduced solely to their functions in the plot, but this lack of personal identity strangely highlights their parts.

The sheer quality of Ellis’ writing, the quirky characters – although the principal villains are believable enough – and the sheer overall pace and brio more than make up for what a harsh critic might see as over-dependence on accidental encounters, but these are minor quibbles in what is a brilliant new addition to the genre.

Just don’t read this on a trans-Atlantic flight or you’ll be looking for a parachute long before JFK!