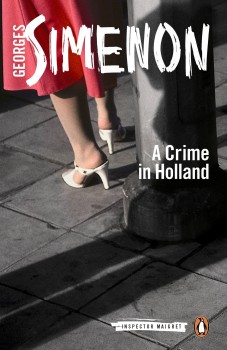 A Crime In Holland

Jean Duclos, a French university professor, is on a lecture tour and has just given a talk at Delfzijl, a small town in Holland, when the owner of the house in which he is a guest is shot dead. Maigret is sent there in an unofficial capacity at the request of the university at which M. Duclos teaches.

This is the seventh in the series of Inspector Maigret novels being republished monthly by Penguin Classics in the hope of introducing a new generation to Simenon. Set in Holland, rather than Paris, this one is a little different, but as Maigret goes about his work, it is a highly intelligent story which holds the attention from beginning to end.

It is typical of Inspector Maigret that not only does he visit Delfzijl in an unofficial capacity, as requested, but he also does so without even informing the local police that he is on his way. Since in addition, he has come alone and does not speak a word of Dutch, his task is clearly going to be difficult.

The murdered man, Conrad Popinga, had been shot just outside his own house and Maigret receives a list of the people present at the time, all of whom had attended the lecture given by M. Duclos that evening. In addition to Mr Popinga there was his wife, Liesbeth, her younger sister, Any Van Elst, next-door neighbour Carl Wienands, his wife and two children, and Beetje Liewens, the 18-year-old daughter of a local farmer. It is clear that if the shot had been fired from the house then it must have been from the bathroom. Immediately after the crime Jean Duclos had emerged from the bathroom holding the murder weapon.

Maigret goes immediately to the scene of the crime and makes what investigations he can, noting clues that appear inappropriate. The presence of a sailor’s cap in the bathroom seems to implicate one of the group of sailors, known as ‘the quayside rats’ who worked on the canals. One of them, who is something of a leader, is observed wearing a cap so new that it appears ridiculous. Maigret notes this but he is aware that the wearer – a man named Oosting – was not in the house on the night of the murder, even if his cap was. Also presented as possible suspects are the father of Beetje Liewens and the young man who is in love with her, Cornelius Barens.

Maigret’s main attention, however, is confined to those people in the house overnight. It seems absurd to assume that the murderer was outside the house and that they were able, after the shooting, somehow to transfer the clues and the gun itself into the house.

However, detailed questioning of those in the house appears to lead nowhere. The wife of the deceased can scarcely believe it has happened and is still in a state of shock; her sister could not have got from her room to the bathroom without going through another room, in which case she would have been seen; and M. Duclos had no reason to implicate himself by picking up the gun and bringing it out of the bathroom. Intriguingly, there is one clue to the identity of the murderer which, if its significance is recognised, provides an answer to what seems an impenetrable riddle. Maigret can see it and it tells him who the murderer was, even though, initially at least, it doesn’t tell him why. That he discovers later.

When Maigret’s Dutch counterpart informs him that the case has been solved and that an unknown sailor, who has now left the town, was responsible for the crime, Maigret absolutely refuses to believe it. What it does, however, is to reinforce his view that Delfzijl is not only a very quiet, rather dull town, but also one in which secrets are kept and not shared with the outside world, where there is a determination to keep oneself to oneself at all costs.

Maigret had assumed that this reluctance to help was due to the fact that he was an outsider, almost a trespasser, but now recognises that it comes from the very nature of the people living in the town. He is convinced that there are dark secrets in this case and he is astute enough to begin to question the right people until the truth is discovered. It turns out that people are not as they seem, that they are – as is frequently the case in Maigret’s investigations – subject to all the weaknesses and fears that human beings possess. It is Maigret’s constant awareness of this that enables him, unlike the Dutch policeman, to look for possibilities beyond the merely obvious.

This is an intriguing story that relies to a certain extent on the location. The feeling of isolation, of separateness, runs throughout the book and takes us into a world with which we are not familiar. However, where human beings are concerned, they will always be subject to the same desires and frailties. In that sense, whether it is an isolated small town in the north of Holland or the great metropolis of Paris, the landscape is always the same.