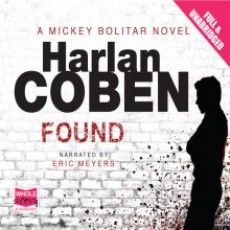 Mickey Bolitar is still searching for his father, but he’s not the only one who has gone missing.

Mickey has led a somewhat nomadic experience traipsing around the world with his parents, but he’s always longed to put down some roots and play in a school basketball team.  When that dream becomes reality, Mickey has never been happier. Then his father is killed in a road accident and his mother spirals out of control ending up in a drug rehabilitation centre, so Mickey goes to live with his uncle, whose career as a basketball player was abruptly curtailed by injury. Mickey does succeed in making friends at school, and becomes close to quick-witted Emma, known as Ema to her friends, and funny, loyal Spoon.

When Found starts, Spoon is in hospital as a result of a bullet wound he sustained at the end of Seconds Away, the second book in the series. It’s a very real possibility that Spoon will le left paralysed from the waist down and his parents blame Mickey, which isn’t much of a surprise, as Mickey blames himself.

When a member of the basketball team leaves school without warning, seemingly caught between two warring parents, Mickey gets his chance on the team, but as basketball star Troy Taylor hates him, that’s not as much fun as he’d originally hoped. Even with Troy’s friend Buck gone, the antagonism doesn’t let up, but then the team gets another shock when Troy is suspended on charges of drug abuse.

Mickey is asked to help clear Troy’s name and at the same time, Ema’s online boyfriend disappears equally suddenly. As ever, the mysterious Abeona Shelter, a shadowy organisation that helps children who need to disappear from something bad in their lives, is involved and complications abound.

Coben’s version of the Scooby Gang swings back into action with style. It’s impossible not to care about what happens to them. Found marks a turning point in one way or another for all of them, and they all emerge from this story a great deal sadder and wiser.

Eric Meyer’s narration does a good job of portraying these changes, pulling off some subtle changes of voice, particular for Ema. I wasn’t too much of a fan of his different voices to start with, but I warmed much more to them as the series has developed and he’s started to hit his stride with the main voices.

There were times when I wondered whether Coben was going to string out the story of Mickey’s missing father too much, but to my surprise, all the threads suddenly started coming together and small seeds very carefully planted in earlier books suddenly started to bloom.

As I’ve followed the adventures of Mickey and his friends from their first appearance in Shelter, it’s hard for me to gauge how well they might come over to someone starting the series at this point, but don’t let that put you off. If you already know this particular Scooby Gang, I think you’ll find that Found ties up the loose strands about Mickey’s family well and satisfyingly. If you don’t already know them, then jump straight in. There’s enough explanation so that you won’t feel totally at sea.