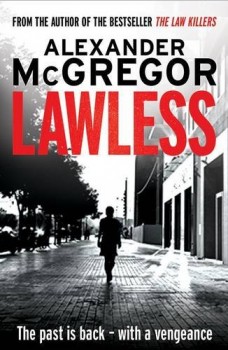 Journalist Campbell McBride’s true crime book is a success, but at a signing in his home town he is confronted by the father of one of the killers he featured who swears his son’s innocence. McBride re-examines the case when instinct tells him the man is telling the truth.

I began to hate Alexander McGregor a few pages in when I discovered he was writing about my life as a crime reporter in less than flattering terms. The booze, the unsatisfactory, short-lived relationships, it all sounded pretty sordid! Who had he been talking to?

Fortunately I read on. McGregor is the chief reporter of Dundee’s two daily papers, and he writes with a tightness and pace you would expect. But he can also produce elegantly-descriptive passages which give a perfect picture of the backgrounds for his action, and sharply-observed and often wickedly funny character sketches. I suspect there are a lot of real people, some only slightly disguised, in here!

Journalist Campbell McBride – what’s an ‘investigative’ reporter? My late and much-missed deputy editor, nicknamed The Wolfman because he could take your throat out with one bite, would have said if a reporter can’t investigate they should f-off to a Tesco checkout – is a man for all seasons, a man’s man who’ll also be loved by women despite, or perhaps because of, his faults.

McBride’s first true-crime book is a hit, but at a signing in his home town, he is approached by the father of one of the killers he featured who accuses him of failing to do any proper research. The young man is serving life for strangling his girlfriend – an open and shut case. The father insists on his innocence. McBride decides to check the story once more and finds a strange series of clues in old newspaper cuttings.

There are more twists and turns – and more killings both past and current – that all seem to point to police involvement. And there’s a delightful female detective inspector to support his investigation and offer McBride a hope of redemption in future books perhaps!

McBride is a truly believable and intelligent reporter, straightforward and not willing to put up with any nonsense. The story is much the same – economically stylish and to the point, and having set the scene gradually, picking up pace and racing towards a conclusion.

It would be churlish to criticise what is a superb read – McGregor’s portrayal of attitudes and motivation in the modern PC and CYA – cover your arse – police service are masterly. Whatever happened to hard-won trust on both sides?

But I never once came across a crime reporter who would run anywhere, even to get a drink, let alone for pleasure! And the denouement is more than a tad contrived, but I can’t see any other way of ending what is a clever, gripping and above all superbly-written story.

Lawless is a brilliant page-turner – noir enough to satisfy current demands and a book you won’t want to put down.