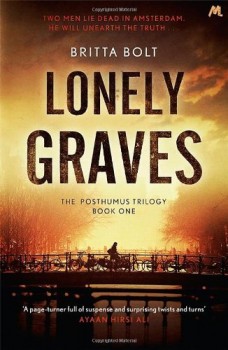 Pieter Posthumus’s job is to trace the families of people who have died in Amsterdam. He gets caught up in the death of a young Moroccan immigrant and a suspected terror plot.

The Amsterdam Lonely Funerals team tries to locate relatives of the dead, and if none can be found, arrange for burial with dignity. Team member Pieter Posthumas, PP to his friends, is more dedicated than most. In two particular cases which fall to him, a suicide and a Moroccan man found in a canal, both have curious features which PP is determined to have explained.

In parallel, Lisette Lammers and her InSec team are monitoring a group of young Islamic men who they are convinced are planning an attack. After months of work, the DA considers the assembled evidence insufficient to convict, and the suspects are still at large. Lisette is under pressure from her boss, Veldhuizen, to get arrests that will stick, and less than happy when he tells her he is putting his own agent provocateur in place, but that she must not disclose this to her team.

The book follows the progress of the two protagonists as their concerns intersect. PP is the main focus, and the arrival of his reporter niece Merel prompts a recital of family history. Her father, PP’s brother, died as a result of a traffic accident after a heavy drinking session for which PP was partly responsible, and his sister-in-law has not talked to him in the 20 years since. Merel becomes involved in the main storyline when chosen by one of Veldhuizen’s contacts as an outlet for information which it is hoped will provoke Islamist action and thus arrests.

The Islamic issue is dealt with through the medium of one particular family caught up in events. The older generation are conscious of their status as immigrants and despite wide gaps between Dutch and their traditional culture keep their heads down. The children are sensitive to the ways they differ from their Dutch contemporaries, more conscious of Islam as a cultural identity, and more demanding. The pressures they face are sympathetically examined, and one of Lisette’s team makes a plea for positive intervention rather than isolation and arrest.

The action moves swiftly from one group to another in a way now pretty standard for action thrillers. Despite the deaths and the threat of more from one or two characters predisposed to violence, the book fails to generate significant suspense, possibly because of the lack of any great urgency, or perhaps it is just that the characters the reader is invited to invest in are not those under threat.

But Lonely Graves should do well enough. Using Amsterdam as background will add something to those who find the city attractive (and who doesn’t?) and there is a somewhat Dutch laid-back feel that provides light relief.  For those who enjoy it, the book is the first in what is said to be a series featuring Pieter Posthumas.