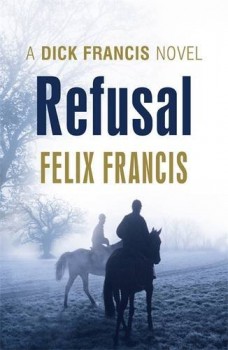 Sid Halley is reluctantly lured back to investigating when a sinister Irishman tries to cover up a racing scam.

It's never been much of a secret that Dick Francis's novels were a family affair. And following his death in 2010, his son Felix has taken over the reins.

Refusal is a return for one of Francis's most enduring heroes – former jockey, turned PI, turned financial whizzkid Sid Halley. Sid's a walking tribute to medical science, having fallen foul of trampling horses and various bad guys at different times. And a doctor is showing interest in replacing Sid's artificial arm with a limb transplant ...

Our hero is reluctantly lured back into investigating by those two faithful Francis tropes - innocents being threatened and For The Good of Racing. Sir Richard Stewart, chairman of the horse racing authority, wants Sid to investigate some suspicious race results. Sid, though, is well out of the investigating game and really not interested. The next day, Sir Richard is found dead, and then a sinister Northern Irishman with a lousy telephone manner wants Sid to put his name to a dodgy report claiming that no betting scam is taking place. Our hero refuses - and then it gets personal.

Cue Sid and old chum Chico back in the saddle, plodding round middle England interviewing grumpy jockeys, and taking day trips to Manchester to tangle with the locals.

Refusal trots along amiably enough, but it's one of those books where your mileage may vary depending on how attached you are to the Dick Francis back catalogue. So for those of us for whom an annual Francis novel was a big occasion, Felix's offerings are paper-thin by comparison. Your favourite characters will be caricatures (this is a barely recognisable Sid, the archetypal stoic, stiff upper lip hero that dad Francis could write in his sleep), the dialogue stilted (Sid watching kids playing and exclaiming 'what fun!' I think not ...) and the racing scenes lack the heady atmosphere that made the books so addictive.

If you want undemanding holiday reading, Refusal does the job. If you retain fond memories of Sid Halley, approach with caution.