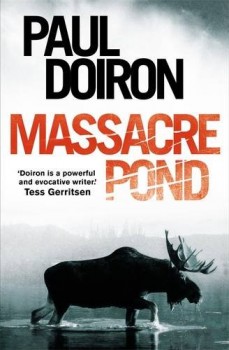 Warden Mike Bowditch is called in when a number of moose are slaughtered, an atrocity seemingly linked with local hatred for the landowner, who is seeking to create a new national park.

Elizabeth Morse has made a fortune from herbal medicines and has bought up thousands of acres of Maine forest with a view to having this designated a park where wildlife will be protected. As hunting, shooting and fishing provide the locals with both livelihood and recreation, Morse is hated and has been receiving death threats.

The slaughter of moose near her lodge therefore looks to be part of a campaign against her, especially when her windows are shot out a few days later. Warden Mike Bowditch has some ideas as to who is behind this intimidation, but is shut out by his Lieutenant, who dislikes him and wants the kudos of solving such a high-profile crime himself.

Bowditch is not a happy man: he is redirected to pointless menial tasks, his mother has been diagnosed with a cancer needing very aggressive treatment, and the woman of his heart is engaged to Matt Skillen, heir to a local lumber concern. His straight-talking helps him gain favour with Morse, and her daughter Briar, but when Briar’s car is forced off the road he is unable to forestall tragedy, and becomes determined to play a more active role in detection.

Bowditch is a sympathetic protagonist; my only problem is that he is perhaps too perfect, even down to the self-doubt which prevents him coming across as flawless. Both Bowditch and several interesting friends come across as real people, however. The difficulties experienced by Bowditch are sufficient to explain his failure to really get to grips with the problem until events provoke him to real anger, although revelations as to those responsible for the succession of crimes are trailed sufficiently that they come as no great surprise to the reader at the conclusion.

One particular feature of the book is the setting. The action in this book is entirely within the Maine backwoods, and the author knowledgeable enough about the flora and fauna to create a wholly believable picture, and a pleasant change from a diet of urban crime. Life in the woods can sometimes be magical, it can also be very unpleasant, especially the human component. I would personally rule out holidaying anywhere that has quite so many gun-toting rednecks likely to loose off a few rounds in your direction if you happen to be wearing moose-coloured clothing.

This is the fourth Mike Bowditch outing, but sufficient backstory is given that a reader coming new to the series is painlessly brought up to speed. The author’s postscript indicates that the story was inspired by a real crime, and by a real philanthropist, with similarities to those depicted in the book.