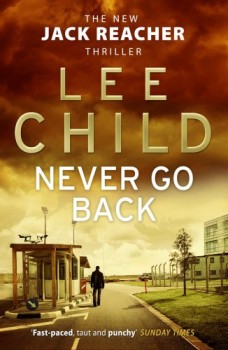 Jack Reacher goes back to visit his old Military Police unit on a whim. But its new woman commanding officer, whose voice he liked on the phone, has gone missing and he’s arrested on charges relating to old events.

Whisper it quietly, but the phenomenon that is Jack Reacher is beginning to run out of steam. This 18th adventure of the lone wolf who dispenses his own form of justice is probably the weakest of the lot and Lee Child’s best-selling hero appears to be in distinct danger of becoming a parody of himself.

Apart from a dreadful sense of déjà vu, the thin and implausible story basically involves one long chase, this time partnered with Major Susan Turner, the new CO of Reacher’s former Military Police unit, who he has hitch-hiked halfway across America to finally meet. When he arrives, he finds she had been arrested. Then he, too, is held on charges relating to events alleged to have taken place many years before – including fathering an illegitimate daughter now 15 years old, a criminal offence under military law. Reacher frees himself and the woman he had come to meet and together they cross America pursued by a mysterious organisation, run by senior army officers, which is trying to frame them.

If that sounds ridiculous, then the sub-plot involving the daughter – and a weak and unsatisfactory ending – are even more so. Child seems to have set out to prove he can write about emotions other than anger and lust, but his attempt to show his hero in a softer light is soon lost in the usual bouts of bone-shattering violence that have become his trademark.

There are some good lines. Trying to explain himself, Reacher tells Turner that 99 out 100 people fear the howl of a wolf and huddle closer to the campfire, but one envies the wild beast – and he is that one. But there are not enough to disguise the fact that this book appears to have been written by rote. Even the graphically described violence is either mundane or unreal, the crippling of two of his pursuers on a plane stretches the imagination – and for two allegedly superior investigators of the ability to command a special MP unit not being able to at least guess what is most likely to come out of Afghanistan beggars belief.

Never Go Back is a real disappointment. Even John Wayne, who in his legendary career portraying all representations of the great American myth of the loners who allow nothing to stand in the way of their pursuit of ‘frontier justice’, bombed out sometimes.