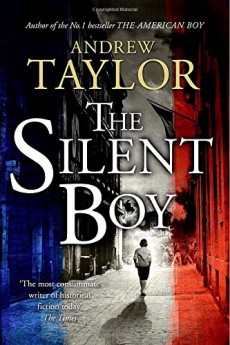 The son of Edward Savill’s estranged wife has been brought to England by French émigrés fleeing the bloody excesses of the Revolution. But the horrors he has witnessed – and a terrible secret he holds – keep the boy from speaking.

Andrew Taylor’s latest story, which features the return of reluctant spy Edward Savill, is magnificently executed, completely gripping and full of suspense and surprise until the very last.

The Silent Boy is set in the early days of the French Revolution and is the tale of a young boy brought to England by French émigrés fleeing the bloody excesses of the 1792 Tuileries massacre which has claimed the life of his mother, Savill’s estranged wife.

Young Charles has seen unimaginable horrors – and is keeping a terrible secret which he must never reveal. He believes total silence is the only way to ensure his safety and refuses to speak at all. Once in England he becomes the focus of a tug of war between a French aristocrat who believes the boy is his, and Savill’s former father-in-law, the secretive and mysterious civil servant Rampton who will make him his heir.

As the battle for the boy intensifies, Savill finds he too is becoming emotionally involved.
Once again Taylor marries flawlessly integrated historical detail to an absorbing mystery to produce a story as darkly strong as anything in the field. His total mastery of plot and character make this a must-read book.

If many elements of the story bring the works of Dickens to mind – the horrors of Paris, the badly-treated child, the vivid descriptions of London, the unexpected kindness of strangers, owe more than a nod to A Tale Of Two Cities, Oliver Twist and David Copperfield – it is a tribute the Master would be pleased to accept.

But I am not sure even Dickens could have produced the brilliant and moving portrayal of the traumatised little boy who is far more intelligent, tough and resourceful than he appears. His obsession with facts, figures and his imaginary friend – a medical plaster cast of a child’s body – are both realistic and touching.

Everything about this gripping and atmospheric thriller is as near perfect as historical fiction gets. The evocation of late 18th century England, the French émigrés – outcasts in both countries – truly authentic, the hunt for Charles totally believable and his own first-person narrative a touch of genius.

It’s impossible to say more about the plot without destroying what is one of the most explosive and surprising denouements you will ever read – which makes the noir school seem tame and belongs more in Imperial Rome or corrupt Constantinople than muddy England.

But Taylor’s superb blending of bloody history with believable and appealing characters and carefully ratcheted and effortlessly sustained suspense should ensure he has yet another best-seller.