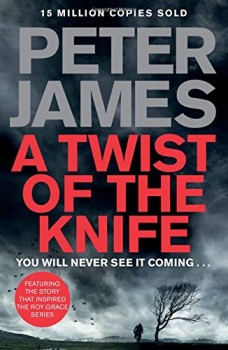 A Twist of the Knife

A collection of short stories bringing together vengeful spouses, ghosts and police procedurals, including the first-ever case for Roy Grace.

Peter James is probably best known for his long-running series of police procedurals starring detective Roy Grace and in this collection of stories, Grace makes an appearance in his first ever case, The Stamp of a Criminal, where he gets called out to a burglary in a well-off area. A valuable collection of silver and an even more valuable stamp collection have been stolen but Grace has some suspicions about the owners. Seeing Grace as a young, uncertain copper was an intriguing glimpse of a now-distant past.

The 30 extremely varied short stories in this collection range from the rather too contrived to the definitely hair-raising. Number Thirteen, the story of a restaurant critic who struggles against his morbid phobia of the number 13 to attend a dinner at London’s supposedly most exclusive dining club, is in the former category, But there are also some excellently spooky offerings that caused quite a few shivers.

James seems most at home when he’s dealing with things that go bump in the night, maybe betraying here his own interest in the subject, although it’s worth noting here that the Church of England hasn’t used the title Deliverance in connection with its exorcists for quite a while, dropping a name with unfortunate overtones of duelling banjos in favour of the term it now uses, the Healing Ministry.

The ghost stories in the collection are invariably chilling, frequently moving, and are without a doubt the best of the bunch, with Gifts In The Night, Ghost Painting and My First Ghost all standing head and shoulders above the rest. But then I don’t have a very high tolerance for a procession of cheating, vengeful and, in several cases downright nasty spouses and partners that form the staple fare in so much crime fiction at the moment.

James also does well when he takes a few steps over the line into horror, with a rather gut-churning story of a dream retirement on a yachting trip around the world that goes tragically wrong. Sun Over The Yard Arm also demonstrates one of James’ very fine trademark twists in the tail.

As with any book of short stories you’ll find the good, the bad and the sometimes indifferent, but there was plenty here to keep me turning the pages until the very end and a reader’s mileage is bound to vary with any such a collection. This is a book that you can happily dip in and out of, finding plenty of interest, with stories of very varied length, to suit whatever time you have available. Just don’t make the mistake of reading some of the ghost stories late at night the way I did, and if you do, very definitely stay away from mirrors or you might be in for a nasty shock!