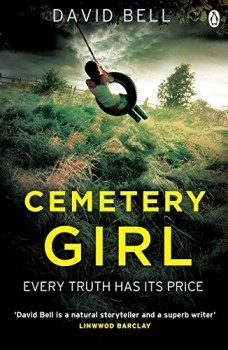 The disappearance of Tom and Abbey Stuart’s 12-year-old daughter shatters their marriage and their lives. Four years later she is found. She refuses to say anything about the time she has been missing and when the police arrest a suspect, she will not give evidence. The Stuarts face a choice: let the man who has destroyed their lives go free – or take matters into their own hands.

English university professor David Bell’s near-Gothic horror story is as real and riveting as newspaper headlines. The disappearance of Tom and Abbey Stuart’s 12-year-old daughter Caitlin shatters their marriage and their lives. When she is found four years later, she refuses to say anything about the time she has been missing and when police arrest a suspect, she will not give evidence. The Stuarts must choose to allow the man who has destroyed their lives to go free – or take matters into their own hands.

Bell’s characters are completely familiar because they are just like you and I. Tom, the less than perfect father, haunted by memories of his childhood and a sense of guilt for his own failings, narrates this creepy tale with a mounting sense of dread – at his own inadequacies, his wife’s use of religion as a crutch, and his volatile half-brother’s possible involvement. Even the supporting cast are stunningly real, from Ryan, the cautious detective, trying like most policemen to do a difficult job to the best of his ability, to the ghastly, happy-clappy minister, these are people you know and meet every day.

It is not the sort of book I would choose to read for entertainment, but this is a missing person story with a dark difference that grabs the attention right from the off, then holds it to the end – and beyond, leaving you wondering what happens next. It’s an utterly haunting and compelling examination of the ties which bind parent to child and family members to each other under the most unimaginable, but unfortunately all too frequent, circumstances.

The pared-down style and sheer intensity keeps this moody tale of loss and self-doubt racing along with unrelenting power and drags the reader with it to an almost unexpected, and quite moving, conclusion. You won’t have come across a missing person story like this before – and you won’t put it down until it forces you to wonder what your own reactions might be.