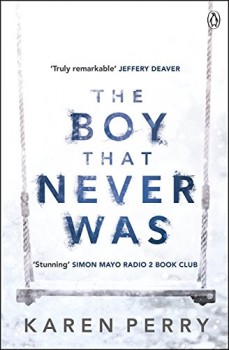 The Boy That Never Was

Harry cannot come to terms with the death of his son, Dillon, in an earthquake in Tangier. So when he sees a boy he believes to be Dillon on a crowded Dublin street, he is determined to find him.

Harry and Robin are a couple of artists living a Bohemian expat lifestyle in Tangier with their three-year-old son, Dillon. One evening, while Robin is at work, Harry leaves Dillon asleep alone in their apartment for a few minutes, but in that short interval, disaster strikes. There is a severe earthquake and their building collapses, apparently killing Dillon, although his body is never found.

Several years later, Robin and Harry are back in their native Dublin, trying to rebuild their lives. Harry is still painting, but has never come to terms with Dillon’s death.  One wintry day, he spots a small boy with a woman in a crowded Dublin street and he is convinced that the boy is Dillon, now eight years old. He tries to follow them but loses them in the crowds.

In the following weeks, Harry tracks down the boy and woman, but is he prepared for the shocking truth that is revealed when he confronts them and the tragic consequences of his actions?

The Boy That Never Was is an unusual crime book, and it is not clear through most of the story whether a crime has actually been committed or what that crime might be. Most of the writing focuses on the emotions and motivations of the characters rather than the action. Alternate chapters are written from Harry’s and Robin’s perspectives. This enables the reader to learn the full story despite both of them keeping guilty secrets from the other as their communication breaks down.

The story starts quite slowly and it took me a while to warm to Harry and Robin. He is self-indulgent and drinks and smokes too much, while she is controlling and dismissive of him. However, he is passionate in his conviction that Dillon is alive and is prepared to take risks to find the truth. She merely wants what is best for her family while dealing with an enormous sense of guilt.

Overall, I was pleased that I persevered to the end, despite the slow start, as The Boy That Never Was is an entertaining read.