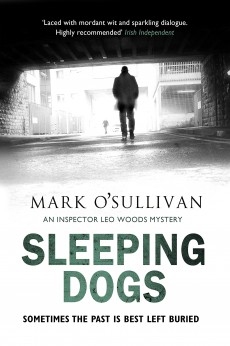 Gangland boss Harry Larkin, dying after being shot, begs DI Leo Woods to find his missing daughter. Woods is drawn into the dysfunctional Larkin family – including Harry’s wife with whom he had an affair.

Forget the Scandi-wegians! The Irish can do noir, abuse and dysfunctional just as well with their bogs and bleak beaches providing an equally suitable and depressing setting to the forests of the north.

Not one of Mark O’Sullivan’s characters in this return of Inspector Leo Woods is what you might call normal. From the protagonist – a middle-aged Dublin detective, mentally scarred by his former service as a UN peacekeeper in some of the world’s most unpleasant conflicts and disfigured by Bell’s Palsy – right through to his feckless drug dealer, all have psychological problems.

But unlike the Scandinavians, who too often dwell on such angst, O’Sullivan’s cast just get on with doing what they do – making them far more human and believable. When a detective confesses he turned ‘bent’ to ease the financial pressures of putting seven daughters through college, it’s at least an explanation which rings true.

Woods’ new case revolves around the shooting of brutal and bullying gang boss Harry Larkin, once one of the detective’s informants, now dying of gunshot wounds in a Dublin hospital. In his final lucid moments he convinces a nurse to summon Woods who he begs to find his missing daughter.

The detective is compromised from the off for he is a former lover of Larkin’s hard-case wife, but as he and his Sergeant Helen Troy, dig into the family’s history they uncover a horrifying catalogue of abuse, violence and murder.

In a plot as dense of the autumn mist over a Wicklow bog, Woods and Troy must also explore the link to a young hit-and-run victim in the same ward as Larkin and discover why a Libyan intern should be so interested in the two.

At times keeping up with the switches from past to present day can be a little confusing, but
O’Sullivan manages to keep a calm control of his writing, never rushes dialogue when not necessary and establishes both live and background scenes and settings with real authority.

For real procedural fans there’s an acutely observed and delightful sidebar foray into the world of police politics in Woods’ relationship with his doubly-ambitious superintendent who seeks promotion and a spot on a TV crime show.

While this story is perhaps not as tightly woven as his debut, Woods is a great leading character – hardly either physically or mentally the perfect leading man, but still committed, tough, and occasionally really funny, all overlaid with a pall of very Irish world-weariness.