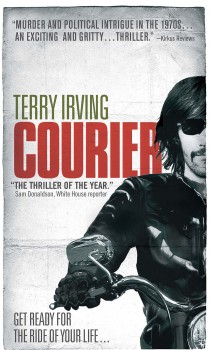 In Nixon-era Washington, motorbike courier Rick finds himself in a fight for his life after he makes delivery of material revealing a conspiracy at the highest levels of government.

Rick is a Vietnam veteran, still dealing with the aftermath of serious wounds and haunting memories from his time overseas. His job as a motorbike courier for news film calls for intense concentration as he zips through the capital at high speed, and helps him avoid dwelling on the past.

Returning with film from an interview with an accountant for the Campaign to Re-Elect the President, Rick only narrowly avoids being hit by a car. He puts this down to bad driving, but when the car re-appears, and the reporters involved in the interview are killed in an apparent accident, he starts to think differently.

From the start of the book, readers are made aware that Rick’s suspicions are all too justified, and that a powerful figure with access to government resources will stop at nothing to kill the story. Rick has allies, however, and an affinity with his bike that enables him to evade attacks and keeps him in the game.

This book certainly earns its thriller tag, with high stakes, plenty of tough situations, and numerous deaths. On several occasions Rick has to push his BMW bike to the limits to stay alive, and plenty of detail is given about the characteristics of the machine which make this convincing. The episodes on two wheels are amongst the most exciting parts of the book, and one regrets the failure of the bike to survive to the end.

Rick is also pretty handy off the bike too, and as he faces a well-equipped and ruthless foe, his continued survival is impressive, especially when he struggles to get a few hours’ sleep. Unlike many of his compatriots, for whom physical and mental problems prevented return to a satisfactory life, Rick has embraced the challenge and actually seems to be the stronger for it. I daresay this is true for only a minority of war-damaged returnees, but it makes him an engaging protagonist.

Rick also benefits from a few friends with useful skills, including his roommates, three of whom are computer geeks and the other engaged with the political scene and an aikido expert. The performance of the team does rather push credibility, given their repeated tendency to expose themselves to danger when they should know better.