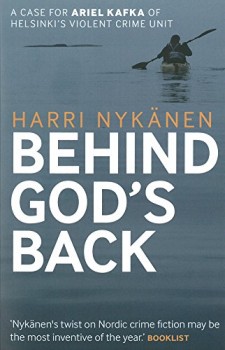 Ariel Kafka, one of only two Jewish detectives in Finland, investigates a shooting and unearths connections to international finance.

The exploits of Ariel Kafka of Helsinki’s Violent Crime Unit and one of only two Jewish police in Finland, may come as a surprise to readers of Scandinavian crime fiction: there are few trees, no snow, and not much angst.

Furthermore, the protagonist is not a miserable alcoholic with a list of personal problems, but a well-balanced cop who enjoys the mental agility called for in his work. His fellow officers are equally stable, outside of a few quirky hobbies. And, incredibly, his boss is entirely reasonable, making no excessive demands and happy to leave Kafka free to exercise his initiative on any fruitful avenues of investigation which open up.

In this, the second in the series, Kafka investigates the shooting of a Jewish businessman, Jacobson, on his own doorstep. Early suggestions of racially-motivated hatred are soon discounted, and in the absence of any personal disputes, enquiries turn to matters of money; specifically the large sums advanced to Jacobson and his son, loans which the dead man was apparently keen to pay off.

As he digs deeper, Kafka finds plenty to bring the crime close to home. Several members of the local Jewish community are involved, and Kafka knows them well. Jacobson’s daughter was his first girlfriend, and Kafka’s brother Eli is joint owner of the company that brokered the loans. A second murder in the community reinforces this focus, although the precise reasons for the deaths remain obscure.

It becomes evident that the root of the trouble lies abroad. The loans to the Jacobson family came through an Estonian company, Baltic Invest, but initially from two men in Israel with links to organised crime in Russia, and said to be under investigation by the Israeli authorities. Representatives of the secret services of both Finland and Israel declare themselves to Kafka and his colleagues and agree to liaise to bring about a satisfactory conclusion.

Unfortunately, this international dimension is not altogether easy to swallow. The final chapters contain several pages revealing the machinations of the people behind the deaths, but that very rich and powerful people should go to such lengths to silence quite unimportant people in such a quiet part of the world – behind God’s back – is difficult to credit, or if they did, that they wouldn’t make a better job of it.

Added to this is the readiness of the undercover agencies to reveal what they know and what they are doing, and the ill-funded and amateurish nature of their contribution. Such organisations tend to be well-funded but very reluctant to let on what they are up to, especially to low-ranking provincial policemen with close connections to parties involved.

The introduction of a glamorous international dimension and expert agencies seems unnecessary and rather undermined credibility. But on the plus side, there is plenty here to like: a refreshing twist on Nordic crime, a sympathetic police team, and the odd glimpse of humour.