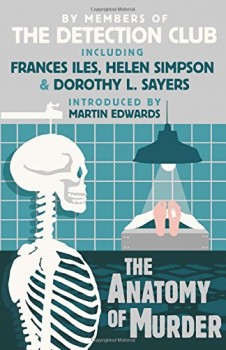 The Anatomy of Murder

by The Detection Club

A re-examination of some the world’s most notorious murder mysteries by seven of the greatest classic crime writers of their age.

This reissue of a book first published more than 75 years ago is strictly one for the genuine connoisseur of detective fiction. If you want an easy read, something to while away a few hours without making you think too much, don’t even bother.

But if you want an insight into the minds of seven of the great classic crime writers, the genuine crimes which fascinated them – and in some cases led to the plots of their finest books – this will repay some hard reading.

The Detection Club was founded in 1930. Its first president was G.K. Chesterton and its members, all leading detective novelists, were fascinated by criminology. Playing detectives fascinated them and dinners at the club’s headquarters in Gerrard Street, Soho – itself the scene of more than a few crimes – were given to debating new angles on famous cases, whether they has been officially ‘solved’ or not.

To finance their activities they produced round-robin mysteries, such as Behind The Screen and The Scoop – for which the notorious 1924 Crumbles murder provided much material – and collective novels like The Floating Admiral and Ask A Policeman.

This co-operative work was published in 1936. Helen Simpson, Dorothy L Sayers, Freeman Wills Crofts, John Rhode – the creator of that great armchair detective Dr Priestly – Margaret Cole, Francis Isles and the less well known Ernest Punchon all contributed commentaries giving their own take on some of the most well-known killings of the last 50 years.

It covers a brutal double murder in New Zealand, a serial killer who stalked Paris, the mysterious ‘suicide’ of an Australian bank cashier and nearer home, a young wife who poisoned her eccentric husband, plus three other cases which made headlines in their time.

As befits their status, the authors were not content to regurgitate known facts. Wherever possible they added new information, made use of advancing techniques of investigation or tried to examine the psychology of the characters about whom they wrote.

Neither were they afraid to criticise shoddy work by the police or controversial courtroom procedure. The fierce intelligence which made their fictional detectives so popular shines through many of their critiques.

Truth is often stranger than fiction and in re-opening these old mysteries the club members have produced a fascinating read for aficionados of the detective story.

Freeman Wills Crofts, whose debut novel The Cask rather overshadowed Agatha Christie’s first effort published at the same time, ends his contribution: “Real life stories have an atmosphere of sordidness and evil which is happily absent from almost all detective novels.”

I wonder what Crofts would make of today’s noir writers with their apparent obsession to leave no manifestation of vice and evil unreported? Never mind. This is a superb book for students of the genre, and should not be missed.