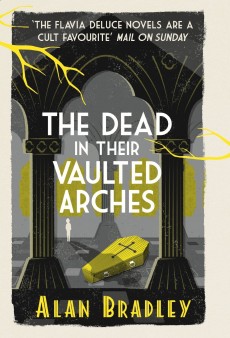 The Dead In Their Vaulted Arches

After being missing for over a decade, Flavia de Luce’s mother is finally coming home to Buckshaw, but the fact that she’s returning in a lead-lined coffin is enough to dampen anyone’s enthusiasm.

Harriet de Luce went missing when her daughter Flavia was only a baby. Flavia has no direct memory of her mother and has always felt rather cheated that her sisters Daphne and Ophelia remember Harriet but she doesn’t.

When news finally reaches Buckshaw that its mistress’s body has been found, frozen in a glacial crevasse in Tibet, hopes of her return any way other than in a coffin are finally dashed. A special train laid on by the government brings her back to the local station in front of a large crowd, including former Prime Minister Winston Churchill.

The occasion is marred by another death, that of a mysterious man who only moments before had entrusted Flavia with a message for the Gamekeeper. Flavia has no idea who he means, and the knowledge dies with him under the wheels of the funeral train.

Flavia, an expert in poisons at the age of 11 and with a better track-record in solving crimes than the village bobby, is a character who could all too easily come across as insufferably precocious rather than entertainingly eccentric. The fact she doesn’t is a huge tribute to Alan’s Bradley’s empathy with his decidedly original narrator and his deft touches of humour and insight ensure that time spent in Flavia’s company is never time wasted.

In The Dead in Their Vaulted Arches she’s considering embarking on possibly the most audacious experiment of her career, against a backdrop of Buckshaw’s invasion by the grieving masses and her own investigations into the identity of the Gamekeeper, coupled with the death of the man on the station platform.

There is absolutely nothing twee about Flavia. She’s analytical, ruthless in her pursuit of knowledge, and utterly original. Bradley doesn’t give up all Buckshaw’s secrets, but at least some of the questions I came away from the previous book with are answered. Where Flavia will go from here, or even if her story will be continued, I don’t know, but I certainly hope the world hasn’t seen the last of Buckshaw’s youngest scion.