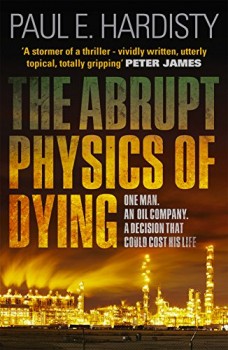 Just occasionally, a book comes along to restore your faith in a genre – and Paul Hardisty’s The Abrupt Physics of Dying does this in spades. So if you’re terminally bored with ‘perm two from the UK, US, Russia, China or Israel and then find a maverick and feisty gal to save the world in 400 pages’, this stunning debut from both the author and new indie publisher Orenda Books is for you.

OK, there’s a maverick here and a feisty gal, and our hero manages to keep going through injuries that would have felled a bull elephant. But aside from that, this really isn’t your common or garden thriller.

For a start-off, it’s absolutely beautifully written and atmospheric – and it provides an unrivalled look at Yemen, a country few of us know much about. And secondly, it’s horribly prescient. I was reading it when the Charlie Hebdo shootings took place in Paris. Like Dan Fesperman, Hardisty has the unerring ability to show us the real people behind the headlines – often on the other side of the world from the usual suspects of the UK, US and Russia.

Claymore (Clay) Straker is an oil company engineer working in Yemen with a past in Angola that he’s trying to forget and baggage the size of Africa. When he’s hijacked by Islamic militants, he has to choose between saving his driver Abdulkader, or investigating why residents in a village near his company’s processing plant are falling sick. What Clay finds has implications way outside of the civil war-torn country. And soon, there’s a price on his head.

The Abrupt Physics of Dying is grim, gritty and relentless. You’ll need a strong stomach in parts, but you’ll emerge with an indelible image of Yemen, its politics, culture and stunning, barren landscapes. This is a true slow-burner, but patience pays off handsomely – I read the final 100 pages in one gulp, snarling at anyone who tried to disturb me.

Clay is the dominant figure throughout, and if I were to split hairs, I’d say that the character of Rania, the journalist, is a touch too convenient and underdeveloped. But springing from the pages are a rash of powerful cameos, including a nurse, a diplomat, an Eastern European hitman, an old South African chum of Clay’s, and the enigmatic Al Shams.

Hardisty resists the temptation to tie everything up too neatly – so it’ll be an impatient wait for a year until Clay and his demons return. In the meantime, take your time with The Abrupt Physics of Dying and appreciate intelligent, quality writing.