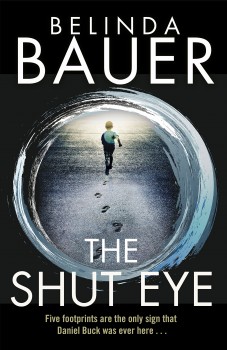 Anna Buck has fallen apart at the seams since her son Daniel went missing. She’s convinced she can still hear his voice and so when Anna hears of a psychic who might be able to help, she jumps at the chance.

Anna Buck spends every day sitting outside the door of her flat, polishing a set of little footprints left behind in some cement by her son, Daniel. The toddler has vanished without trace, and Anna blames her husband James for leaving the door open. That was all it took, one careless moment that changed their lives for ever, pushing them apart.

James works next door at a garage, being paid an extra 20 quid a throw for being sacked on a regular basis by his boss to appease any customers they might have pissed off. It’s demeaning and James hates it, but he needs the money since Anna stopped going to work.

When Anna receives a flier for a psychic, she jumps at the chance of talking to someone who might be able to offer some hope, but Richard Latham seems more interested in finding lost dogs than lost children. He’s not the only one interested in lost dogs. Sandra Clyde is determined to find Mitzi and her husband just happens to be in a position to pull some strings.

Belinda Bauer excels at throwing her characters into some bizarre situations, and you don’t get much more bizarre than a Superintendent getting a DCI to investigate his wife’s lost dog. But DCI John Marvel gets results, usually at the expense of his home life and his marriage, although he’s now doing his best to stay off the booze. What he wants to be doing is re-investigating an entirely different disappearance, that of Edie Evans, the schoolgirl whose disappearance still haunts him – the one crime he failed to solve.

Bauer sketches her characters lightly and with great skill, from illegal immigrant Ang, working with James in the garage, to the harassed female officer who has to head off at the pass all the people who want to complain – and not without some justification – about Marvel, whose bull in a china shop tendencies leave him all too often lurching from one disaster to another.

It’s hard to think of anyone who can combine comedy and tragedy into a seamless and often heartbreaking whole better than Bauer. Her writing is frequently dark and at times almost too painful to bear, but it’s also strangely lyrical and always compelling.

I finished The Shut Eye in two sessions, breaking a cycle that had seen me pick up and put down numerous books over two or three days without being able to settle to anything. Surrounded by piles of books, I’d complained to a friend that it was a case of ‘water, water everywhere, nor any drop to drink’, a phrase that came back to haunt me in a big way, as anyone reading The Shut Eye will discover.