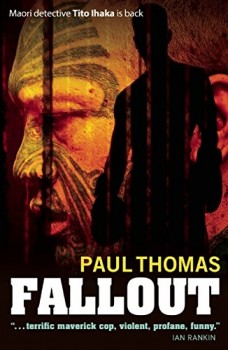 Maori detective Tito Ihaka is tasked with a very cold case, and combines this with investigations into the death of his own father.

Maori detective Tito Ihaka featured in three books published in the 1990s, and returned in 2013 with Death on Demand. In his latest outing he remains unruly, violent and profane, but is entirely capable of reserving those aspects of his behaviour for those he deems deserving.

Ihaka is called in when Auckland District Commissioner McGrail receives new information on a 27-year-old case where Polly, a young woman, was strangled. It was McGrail’s first case and he wants a solution before he retires, so directs Ihaka to focus on it, in the knowledge that Ihaka’s persistence makes him the man most likely to get a result. Ihaka is rewarded with agreement that he can use any spare time to follow up on a hint recently received that his father’s death was not an accident.

Progress on both cases is rapid. Polly’s death occurred in the midst of a party for Auckland’s movers and shakers, and the names of many present were never reported to avoid discomfiture. Ihaka discovers that Polly overheard a covert discussion by some political bigwigs, as well as being witness to some scandalous sexual activity. The family who hosted the party are no longer so well-connected as to be able to fend off police enquiries, and Ihaka is happy to bully unmercifully until he gets answers.

Ihaka’s father died of a heart attack, thought to be of natural causes, but his strong left-wing political leanings and disinterest in compromise earned him some powerful enemies. Miriam, a political researcher, finds papers which suggest their enmity might have taken practical form. When Miriam is attacked, Ihaka suspects that these enemies may still be active, and soon is on the trail of the prime mover.

The two intertwined investigations are further complicated by another plot line, this one following Van Roon, a disgraced former protégé of Ihaka, who is employed as a PI to find the whereabouts of a man who disappeared from New Zealand shortly after Polly’s murder. This job leads him to a woman who also comes up in Ihaka’s enquiries, thus bringing the two men back into contact and forcing cooperative action, although neither has any enthusiasm at the prospect.

The dense plotting allows for very little let-up in the pace and, if you can retain all the names without having to refer back, this makes for an exciting book. As with its predecessor, a substantial amount of backstory is needed to bring the reader up to speed, but this is woven into new material without greatly holding up the flow. While the main stories are resolved satisfactorily, some of the subsidiary plot lines are left hanging: Ihaka’s relationship with girlfriend Denise, and McGrail’s retirement, in particular. One assumes that these aspects will be taken up in the next in the series.