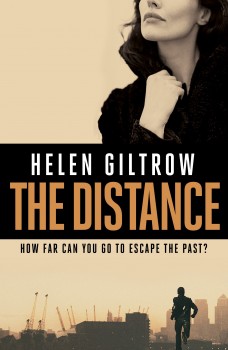 A top security prison is not usually somewhere people want to break into. But for hit-man Simon Johanssen, it’s different. He’s got a job to do, and it’s up to old friend Charlotte Alton to help him.

The Distance is a darkly compelling look at a Britain that failed to shake off the effects of recession. The prison population has grown to frightening proportions and the government has failed to curb a series of dangerous prison riots, so an alternative needed to be found. And that alternative is a private enterprise called the Program, a top-security prison like no other.

A run-down suburban area scheduled for redevelopment has been cleared of its former inhabitants and turned into the exact opposite of an open prison. A collection of streets is now encircled by 40-foot high walls that can’t be climbed over or dug under. There’s an electric fence, razor wire and an air exclusion zone. From 6pm through the night, the gates won’t be opened for anything or anyone. It’s up to the inmates to regulate their own lives and form a society, no matter how dysfunctional. In short, it makes the old Alcatraz look like a cosy bed and breakfast.

When fixer and information specialist Charlotte Alton is approached about the Program, she expects to be asked to get someone out of there, but what she doesn’t expect is to be asked to get someone in. She says no. The Program is untouchable and she’s got no intention of getting involved. But that resolve doesn’t last when she discovers who’s intending to do the infiltration and why.

Simon Johanssen is one of the few people Charlotte cares about and the problem is that she doesn’t trust anyone else to watch his back, so she sets her mind to cracking the seemingly insoluble problem of how to get someone into – and then out of – the Program. Johanssen’s job when he gets in there is to find a target and kill them. The job is complicated more by the fact that the prisoner who has emerged as top dog in a very vicious arena has sworn to get revenge on Johanssen for something that happened two years ago, as a result of which Johanssen had to disappear.

Helen Giltrow presents a stark view of a society not very far removed from our own. Life inside – and outside – the Program is brutal, and she doesn’t pull any punches, although the violence is never thrown in just for effect. Her writing is taut and expressive, her characters are multi-layered and always well-drawn, whether they’re major players or only there in supporting roles. The plot is both complex and satisfying. At times it felt a bit like walking blindfolded through a maze, but she always stopped short of reducing me to total confusion.

The main standout for me of The Distance is the sheer quality of Giltrow’s writing. Despite a long-standing aversion to the use of present tense, I was utterly swept along by the story, devouring the book in two long sittings. If you like your fiction diamond-hard and knife-sharp, this is definitely one for you.