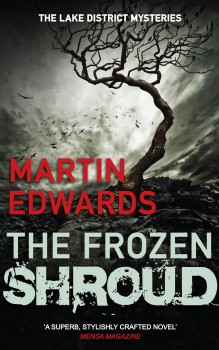 DCI Hannah Scarlett joins forces again with historian Daniel Kind to investigate a third killing – all following the same MO and spread over a hundred years – in a small and isolated community on the shores of Ullswater, reputedly haunted by the ghost of the first victim.

Legal eagle Martin Edwards is unlikely to win many friends at the Home Office for one of the many sub-plots in this clever and fascinating sixth book of his Lake District mysteries. Edwards, partner in a law firm, has the gall to suggest that senior police posts should actually be filled by experienced policemen.

Assistant Chief Constable Lauren Self is, Edwards makes clear, everything that is wrong with modern policing. A politically correct, management-speaking, self-promoter, she has been too busy ensuring her effortless rise through the ranks to have any real knowledge of police work.

In contrast, his long-running heroine DCI Hannah Scarlett, who has gained her position by ability and experience, finds her successful cold case team under threat from budget cuts at the same time as she is trying to deal with her break-up from her long-term partner.

Personal connections rule her out of the direct investigation into a gruesome murder, but she renews her contact with historian Daniel Kind. The killing is the third – all following the same MO and spread over a hundred years – in a small and isolated community on the shores of Ullswater, reputedly haunted by the ghost of the first victim.

A positively florid cast of characters give this the feel more of a game of Cluedo or a country house murder mystery. Lives and loves clash – and the evidence in all three cases can be read two ways. Were the murders the work of an outsider, or was a local responsible?

Edwards interweaves past and present, complex personalities and personal relationships in which nothing is what it seems. The battered and covered faces of the victims set a theme continued through a masked Hallow’een party, cosmetic surgery, a surreal pair of gay actors, changes wrought by time, and the ever-present Lakeland mists.

The plot, which seamlessly blends past with present, allows Daniel, who becomes deeply involved with both past murders as well as the present day killing, to use his academic skills to demonstrate that received versions of events are not always accurate – and that history can be made to repeat itself.

The Frozen Shroud is well written and atmospheric, and Edwards brings the Lake District background to life with realism, Part procedural, part history book, part a convincing and beautifully crafted mystery, it will leave you in doubt right to the end.

Hannah’s love life aside, this is an effective standalone story, which will keep you going to the very last page – and probably send you searching for the earlier books in the series. It’s great stuff.

Oh yes, the ghastly Self! After failing to land yet another promotion, she has been headhunted by a firm of management consultants. As a character who so clearly represents what political thinking has done to damage real minority equality, particularly in the police force, it’s the least she deserves!