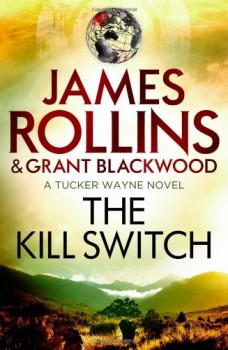 Undercover operative Tucker Wayne with his dog Kane must get a Russian pharmaceutical magnate who may hold the key to a bio-weapon which threatens a global apocalypse out of the country.

Take an undercover superhero. He must be a serving or ex-Ranger or Navy SEAL, a man from a unit the Pentagon says little about and allows the public – and authors – to speculate wildly. Have him work for one of the alphabet of agencies which comprise that contradiction in terms that is the American intelligence service. Stir in a madman – preferably a hardline Stalinist Russian general. Add a squad or two of Spetznatz, the Russian special services unit, good – but not quite so good as our hero – plus a few freelance assassins. Posit a threat to the whole world. Nuclear’s no good, that’s far too old hat. Biological is the new flavour of the month. Set it in dramatic locations – Russia and southern Africa are spectacular and nicely contrasting. Cruising down the Volga in a submarine and the harshness of the Namibian deserts and mountains are wonderfully attention-grabbing.

Mix well and what have you got? The answer is the latest Tucker Wayne adventure.

Oh, I forgot one thing in the recipe for success James Rollins, the inventor of the Sigma Force series and his collaborator Grant Blackwood exploit so well – a superhero dog!

Kane understands more than 1,000 words of command. The Belgian Malinois – a smaller, more intelligent and active version of a German Shepherd – is so much at the heart of this story with constant anthropomorphisation making a case that he is a far better-rounded character than the two-dimensional Wayne. All go ‘aaaahh’!

Seriously. The plot is impossible. The action is near non-stop and at times borders on the unbelievable but all round it’s a thoroughly enjoyable old-fashioned thriller in modern dress. Both authors stress their devotion to accuracy and certainly their settings, weaponry, veterinary and technical knowledge is first class. The biological stuff of nightmares is, I am glad to say, only scientific conjecture, but brilliantly explained.

But all this clever background work is ruined by one glaring error. On arrival in South Africa, Wayne and his companions are met by a member of the Ndabele tribe who speaks Xhosa. The last time I was down that way the Ndabele spoke their own tongue, siNdabele – and the Xhosa and their language were creatures of mockery in the circles in which I moved!