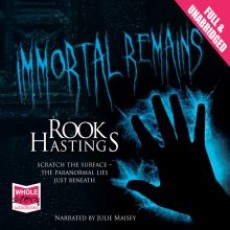 When four girls from a posh school are killed in a series of seemingly unrelated accidents, Bethan and her friends believe there’s more to the deaths than meets the eye.

On the face of it, Woodsville is just an ordinary, boring, rather down-at-heel town, with a tough housing estate and an equally tough school, but scratch the surface and it turns rapidly into Weirdsville.

When Bethan, a spiky, blue-haired Goth who has a blog devoted to supernatural happenings, is contacted by Charlotte, a girl from the exclusive Riverbank school on the edge of town, her friends think it’s yet another wind-up, but Charlotte seems genuinely scared. Four of her friends have died in a series of seemingly unconnected, freak accidents and Charlotte thinks she’s going to be the next to die.

Bethan is determined to investigate, and ropes in her friends – tough-talking Kelly and steady, geeky Jay. As they learn more of Charlotte’s story, Bethan believes the girl isn’t telling them the whole truth, but she’s determined to get to the bottom of the puzzle and help if she can. The fourth member of their gang, Hashim, has a talent they need to harness, but Hashim is doing his best to turn his back on the weird stuff and concentrate on football instead, despite the fact that he’s constantly surrounded by an army of ghosts that only he can see.

When the friends learn from Charlotte that the problems at Riverbank started when a group of the girls started playing around with an Ouija board, events take an even more sinister turn.

Julie Maisey does an excellent job of differentiating between the four main characters, giving them all distinctive voices, from blunt, tough Kelly, the girl from the rough end of the estate who sounds a bit like Catherine Tate’s head-tossing teenager with the constant refrain of ‘whatever’, to Charlotte, shipped over to the UK from her home in America because her parents had run out of schools willing to take her. Maisey’s also equally at home with the boys, Jay and Hashim. Her impressive range of individual voices helped iron out some occasionally confusing point-of-view shifts in Rook Hastings’ genuinely creepy tale of a group of embattled teens caught up in events they don’t understand.

I was pretty well entrenched in the narrative before I realised that Immortal Remains had been preceded by another book, and it’s a testament to the strength of the writing that all the main characters were established quickly and easily, without any sense of having come late to the party. I now intend to catch up with Nearly Departed, to find out how this disparate group of very real teenagers came together in the first place.

Immortal Remains is well-worth listening to for the strength and range of Maisey’s pitch-perfect narration and Hastings’ chillingly entertaining combination of Buffy the Vampire Slayer meets Nancy Drew, transplanted to Weirdsville, UK.