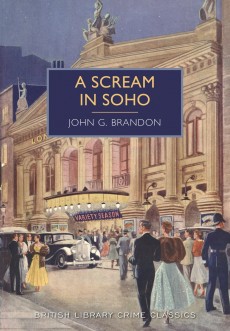 A Scream in Soho

Detective Inspector Patrick McCarthy is preparing for bed in his Soho flat when he hears a scream. Stumbling through the 1941 blackout, he discovers clear evidence of a murder – but no body.

While the Detective Club parades the best of classic ‘who’ and ‘how-dun-its’ from the late 1930s, John G Brandon’s story, one of more than a hundred he wrote and published just before his death in 1941, makes the case for popular lurid action thrillers.

Nothing could be more different from the work of Dorothy L Sayers and the other Detective Club members – in fact thriller writers were banned from the club!

Many readers will wince at some of the social attitudes, but there is something almost endearing as the chief villain – naturally a Nazi agent – Germanically hisses at the hero while holding him at gunpoint: ‘Curse you! Whatever happens, you will not be there to see it!’

Soho born and bred Irish-Italian Detective Inspector Patrick Aloysius McCarthy – even Brandon’s hero is improbably exotic like other popular detectives such as the gentleman adventurer Bulldog Drummond and Sexton Blake. Brandon actually wrote many instalments of  Blake which ran in comics, novels, papers and on the radio for almost 70 years – but McCarthy is a real one-off.

McCarthy is preparing for bed in his Dean Street flat when he hears a scream. Stumbling through the blackout, he discovers clear evidence of a murder – but no body! As more killings – including a policeman – follow, his investigations lead him into a world of Italian gangsters, transvestite German spies and glamorous Austrian aristocrats – and a Nazi plot to steal vital wartime secrets.

In this he is aided by an unlikely collection of assistants, some willing, some forced, including an Assistant Commissioner at Scotland Yard who he seems to treat as almost an errand boy!

It’s all cheerfully lowbrow stuff with action that fairly races along. But it is Brandon’s descriptions of Soho and its people during the period leading up to the Blitz that make this book so memorable.

The Australian former heavyweight boxer, who came to London after the First War, clearly loved the gaudy mile between Oxford Street and Shaftesbury Avenue – and it shows. Older readers will remember the Italian or French family-run restaurants, cafes, bakeries and shops which gave the area a Continental feel only accentuated by the ever-present hint of vice and danger.

Brandon would have been horrified by what has happened to Soho today, but his book recalls a simpler time – and apart from providing a great history lesson, is also a fascinating and enjoyable read for students of popular crime, or anyone who likes a good, cleverly-written, old-fashioned thriller.