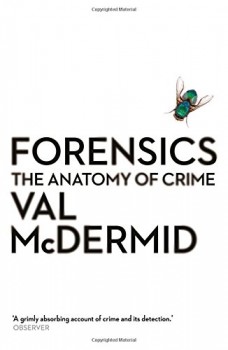 Forensics The Anatomy of Crime

Crime writer Val McDermid takes a fascinating look behind the scenes at the world of forensic science and how it has developed over time.

To accompany a major exhibition at the Wellcome Institute, running from February to June 2015, Val McDermid has taken a fascinating and in-depth look at the world of forensics, defined by the Oxford English Dictionary as ‘relating to or denoting the application of scientific methods and techniques to the investigation of crime.’

This meticulously researched book is divided into 12 chapters covering crime scenes, fire scene investigation, entomology, pathology, toxicology, fingerprinting, blood splatter and DNA, anthropology, facial reconstruction, digital forensics, forensic psychology and the courtroom. Each chapter gives an overview of the history and development of each branch of forensic science and takes a detailed look at cases both ancient and modern, building a clear picture of both the reach and the limitations of each branch of the rapidly-expanding disciplines that make up the art and science of forensics.

McDermid draws and expands on the contacts made over many years as a crime writer as experts in all fields talk frankly and at length to her, building a picture of the many different tools now open to the crime scene investigator in bringing a case to court. Complex areas such as DNA evidence are well explained, taking the reader through the many advances that are now allowing convictions to be obtained from old evidence.

This is certainly not an uncritical look at the subject. Many so-called experts were little more than self-aggrandising charlatans, convincing juries more by their acting skills than the weight of their evidence, and McDermid lays bare some horrifying miscarriages of justice that any advocate of the death penalty would do well to remember.

There are times when the subject matter certainly isn’t for the faint-hearted with descriptions of charred, dismembered and maggot-ridden corpses, as well as stories of vast numbers of dogs poisoned and rabbits bludgeoned to death in the name of the emerging sciences of toxicology and blood-splatter evidence respectively. But McDermid’s narrative skills are such that no matter how unpalatable the subject matter, the story she tells remains endlessly intriguing. It’s hard to see how anyone interested in writing or reading about crime in any of its guises can fail to find something of interest here.

The same is true of the exhibition the book accompanies. It’s clear, well-laid out and always accessible, with much that will be of interest to the specialist and the layperson alike