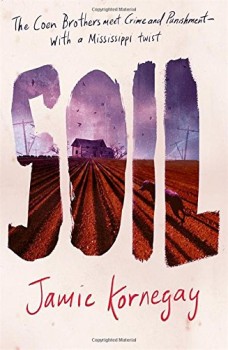 A Mississippi man determined to become an agricultural pioneer loses his bearings and falls foul of a deluded deputy sheriff.

Jay Mize is a man who finds much that is senseless in modern society, and takes his family into the country where there is land to pursue his agricultural experiments. But proselytising loses him his job, floods ruin his handiwork, and his wife Sandy and son Jacob move back to town.

Increasingly rudderless, Jay is unnerved by the discovery of a corpse in what is now a lake at the back of his house. He is convinced that the local police will find him culpable, and takes elaborate steps to remove any trace of the body. But Madrid deputy sheriff Danny Shoals, self-indulgent nephew of the local sheriff, is showing signs of interest in both Jay and Sandy, although for very different reasons.

This is a very assured first novel and a pleasure to read. The portraits of the leading characters are entirely convincing and the interactions carry a sense of impending calamity that propels the narrative to the final showdown. Jay in particular is well-drawn: an intelligent, thoughtful man frustrated by the trivial obsessions of modern culture and the failure of his enthusiasms, on the borderline of complete breakdown.

Sandy is more firmly rooted, but as a single parent with a sick father finds life challenging, leaving her vulnerable to the manipulative Shoals. Shoals himself leads a life entirely dedicated to sexual gratification: perceptive enough to maximise his chances of the next conquest but in a broader context unable to see the long-term consequences of his predatory behaviour.

Events proceed with the seeming inevitability of a Greek tragedy. Without an income, Jay loses his power supply, eats irregularly, and becomes increasingly prone to paranoia and bizarre behaviour. Shoals’ activities eventually expose him to the derision of his colleagues, and getting the goods on Jay in a crime-solving coup is the only way he can envisage regaining his reputation.

At the same time the book is infused with black humour. Despicable as he is, Shoals' antics and self-delusion are often very funny. The macabre spectacle of Jay blundering about in the mud devising better ways of reducing his unwanted cadaver to dust has its amusing side. Sandy is the character to whom one can most easily extend unfettered sympathy, reluctantly separating from her husband for the benefit of her son, but missing his support and gallantly striving to keep her life together.

There is a consistently droll depiction of both the main characters, and of other minor persons such as Shoals’ mother, a woodsman whose dog Jay shoots, and the old geezers who gather at the Hilltop grocery to swap insults. The dialogue is spare and tight, but the author gives lengthy sections of dry dispassionate description of the thoughts of his creations, which are always enlightening. Soil is very good stuff, and I look forward to seeing more from Jamie Kornegay before too long.