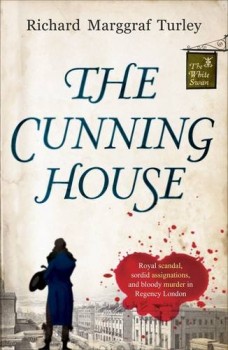 A raid by the Bow Street Runners on a notorious male brothel, an attack on the Duke of Cumberland at nearby St James’ Palace and the alleged suicide of a valet …What links the three events? Lawyer Wyre must find out.

You’ll need a strong stomach for this sordid Georgian tale of illicit sex, religious extremism, murder and espionage, set against the background of a country almost crippled by the ongoing war with the French. Richard Turley does not believe in sparing the details. The story hangs on two historical events from the year 1810.

In London’s Vere Street, a tavern used as a house of assignation and male brothel where homosexuals indulge in passions for which they can be hung, is raided by the Bow Street Runners. The raid sees an already feverish city, gripped with fear over the presence of Napoleonic spies, explode into hatred of the so-called ‘Mollies’, allied to suspicions over their political sympathies. Hangings or pillorying of those convicted become horrifying public spectacles, whipped up by religious extremists.

A few miles away in St James’ Palace, a Corsican valet to the Duke of Cumberland, George III’s fifth son, apparently kills himself after attacking the scandal-beset prince who was later to become King of Hanover. The authorities are anxious to see the death only as suicide, but lawyer Wyre, who has hitherto made an undistinguished living prosecuting homosexuals, is reluctantly drawn into a network of dark alliances that appear to link the raid, the palace death and the war against France.

With the help of an undercover Runner and the fiancee of a pioneering mental health doctor, arrested in the tavern raid, he explores a labyrinth of asylums, brothels, madness and secrets, to a shocking and explosive conclusion.

Turley, as befits a poet and university lecturer, writes brilliantly. The whole story is told in the language of the period – much of it frankly brutal – but it serves to drive and build intensity and authenticity. This is a twisted, clever, compulsive and shocking look at the vice and corruption of the period – and one which should come with a health warning for those of a prudish nature!