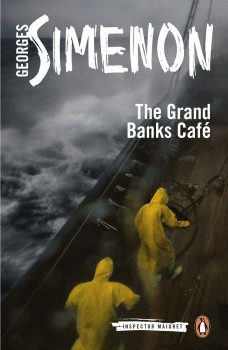 Maigret is asked by an old friend to look into the case of a former pupil of his who has been arrested for murder in the fishing port of Fécamp after returning from three months at sea. He agrees and enters a dark and seemingly mysterious world

Maigret explains to his wife that he would like to oblige an old friend by taking up the case of a young man accused of murder in the port of Fécamp. Rather tentatively, he suggests to her that they might spend their holiday in Fécamp instead of Alsace. Her family lives in Alsace and she loves to be with them in the summer, making jam and plum brandy. Fécamp, which she knows will be full of visitors from Paris, doesn’t appeal to her but in the end she agrees. However, aware that as the wife of a police inspector she will inevitably be spending time alone, she insists on taking her sewing and crocheting and refuses even to contemplate swimming.

Her first act on arrival at the hotel is to rearrange their room to her liking, after which she and her husband have dinner. He is then left alone to his investigations which begin in the Grand Banks Café on the harbour front. He finds it full of drunken and very hostile sailors from the trawler, Océan. After a considerable amount of bad-tempered brawling, the sailors leave and the landlord explains to Maigret why they are in such a bad mood.

The voyage of the Océan had begun badly with one of the crew falling from the derrick and breaking his leg even before the ship left port. Whilst at sea, the ship’s boy had been washed overboard and when the ship was re-entering harbour the crew lost control of it. It was then found that the cargo of cod had not been properly preserved and fetched only half the normal price.

The sailors were very superstitious and were convinced that the whole voyage had been cursed - a belief that was strengthened when the dead body of the captain was found in the water on the night of their return. However, he had not drowned but had been strangled and the wireless operator, Pierre le Clinche, had been arrested and charged with the crime. The crew were adamant that Captain Fallut had behaved very strangely throughout the voyage and even intimated that he had lost his mind. They maintained that his relations with le Clinche had been particularly bad.

When Maigret decides to look into the captain’s private life he can find nothing that would account for this. Fallut had always been a very reliable employee and would shortly have been entitled to a pension allowing him to live quite comfortably. He was in a relationship with a widow who was fully expecting to be married to him when he retired - a situation with which he had appeared to be perfectly satisfied.

If Maigret can see no reason for Fallut to be murdered, he can see even less reason for Pierre to be the murderer. He had come from a very humble background and had managed to educate himself well enough to qualify for a job as a wireless operator. He was very much in love with Marie Léonnec, a girl whose parents - unlike his - were bourgeois and quite well off. She returned his love and it seemed that her parents, who had originally been against her marrying him, appeared now to be reconciled to the idea.

Maigret is totally puzzled and is making no progress until he happens to overhear a conversation between a man and a woman in a café. From that point on he begins to unravel the mystery.

As in other Maigret stories, the unravelling is not immediate. There is no blinding light that suddenly reveals everything. It is a question of patient deduction - a deduction based on a knowledge of human behaviour, with its weaknesses and its fears. There is one weakness in particular which is very relevant and comes in the form of a voluptuous and irresistible young woman - the type that other women frequently describe as ‘no better than she should be.’ Somebody hated her sufficiently to take a photograph of her and obliterate the head completely, the pen having bitten into the paper. Maigret knows that if he can find the person who did this he will be close to a solution.

There are a few excellent pages in which he sits down alone, talks to himself and simply concentrates on what, given certain established facts, must be the truth. When that truth is eventually known we recognise it because we ourselves, in one way or another, have been presented with similar situations, where we have felt, "There but for the grace of God……"

The rage indicated by the defaced photograph was such that it led, albeit indirectly, to the tragedy of the dead man in the water. As usual in Simenon, whilst the way in which the crime is solved is intriguing, it is his placing of it in a human context that makes it so much more than the conventional detective story.