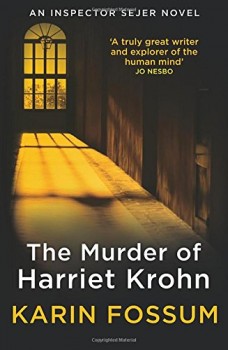 The Murder of Harriet Krohn

Charles Torp has problems. He misses his dead wife and his gambling addiction has driven his teenage daughter away. His plan to solve his problems and win her back goes horribly wrong.

Charles ‘Charlo’ Torp is a self-pitying mess. His wife is dead and his addiction to fruit machines has left him jobless, deep in debt and has driven away the teenage daughter on who he dotes. Their only contact is reduced to long letters from father to a daughter who does not reply – one of which sets the tone for what follows.

Torp unrealistically plans to solve all his problems at one go – by robbing a wealthy old woman in her home – but the scheme goes drastically wrong when she fights back and first he kills her and then is involved in a car accident as he flees the scene.

This story is told through the words of the killer, and poses a question as to how far would you be prepared to go to turn your life around – and could you live with yourself after.

Karin Fossum, by far the most sensitive of Scandinavian authors, works Torp’s guilt complex to superb effect. The scene where he counts peppercorns into ‘good’ and ‘bad’ piles to try to work out if he can ever balance what he has done by future good deeds raises philosophical questions – and his near-obsessive relationship with his horse-mad daughter is brilliantly described.

Although this is the latest of the Inspector Sejer series, the patient and methodical detective gets surprisingly little space. Much of the early part of the book goes into minute detail about the night of the murder and its immediate aftermath.

When Sejer finally makes an appearance, he has already finished much of the procedural work which always surrounds a murder and has a clear idea of who he wants and why. His clever and tenacious cross-examination and breaking down of what is obviously his prime suspect is a fine portrayal of thoughtful and tenacious police work.

Although Fossum clearly expects her readers to feel a certain emotion for Charlo, even perhaps sympathise to some extent with a man trying to come to terms with guilt and rebuild his life, I’m afraid she failed with me.

All her clever writing cannot disguise the fact that Torp is a weak failure of a man who deserves everything he has – or is going to get. The fact that he loves his daughter reminds me of Violet Kray’s description of Ronnie and Reggie as: ‘Always good boys at home’ and as he makes clear in his final letter to his daughter, he is happy to work the system to avoid acknowledging his own guilt.

Call me a cynic, but when the case goes to trial I expect his defence brief to stand up and say: ‘My client is the product of a very deprived childhood....’