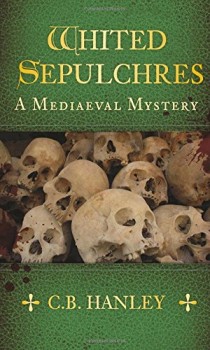 Edwin Weaver must solve the killing of the earl’s household marshal which threatens to disrupt plans for the wedding of his sister. But there appears to be no motive and Edwin soon suspects there are other targets for the killer.

Why do women write so well about certain periods of history? From the late, great Diana Norman and the brilliant Susannah Gregory to promising new authors like Sarah Hawkswood, they have made the turbulent 12th and 13th centuries, when England went through a series of upheavals and civil wars, almost their exclusive territory.

CB Hanley, who has a doctorate in medieval studies and is a major contributor to non-fiction writing on the period, has played a prominent role in this female takeover with her young crime solver Edwin Weaver.

Edwin, who is plunged headlong into investigating wrongdoing for an imperious lord in place of his late father, is maturing from a rather unworldy young man into a key member of a noble household in this, his third adventure. He is perhaps a little less naive, but equally likeable.

The household marshal at Conisbrough castle has been poisoned and the earl wants the killer caught before the death can cast a shadow over the wedding of one of his sisters. While the dead man was a fussy, prissy little soul, well suited to his task, Edwin can find no reason why anyone should want him dead. As his investigation stutters and stalls, he begins to suspect that the death was an accident – and that the killer has a higher target in mind.

But how can a village boy voice his suspicions to some of the highest in the land and face their ridicule, humiliation or worse? If he is wrong, the life he has come to love is finished. If he’s right and fails to speak, some of those he serves or who have befriended him will die.

All this is set against a background of war and uncertainty. Gangs of deserters turned bandit are roaming the country after the bloody defeat of the French army and their English allies at Lincoln – an episode which still haunts Edwin’s dreams.

As his own life, kept on a level keel by the belief that one day he will again meet the girl who bewitched him at Lincoln, develops, so too do those of his friends: Martin, the earl’s senior squire, Peter, the young orphan taken in as a page by a kindly knight, and others.

It’s clever. It’s well written. It’s believable. It’s historically accurate. It’s a first class medieval mystery. But there’s one thing missing. The earl is like some great and unpredicatable eagle brooding in the story’s background and occasionally exploding into rage or action – but new readers will have no idea who he is or why he is so important.

In 1217, William de Warenne, earl of Surrey, was one of the major barons of England. Of Plantagenet blood – which explains the notorious temper – he was directly related to the English royal family. After the mis-rule of King John, who he had supported, De Warenne, like many nobles, wavered after the invasion by Prince Louis of France, a maternal grandson-in-law of Henry II of England, who seized half the country and was crowned king.

After joining the rebels, he finally pledged support to the young Henry III and his regent, the formidable Willam Marshal, but although accepted, was never fully trusted.

In this atmosphere of war, suspicion and mistrust, with every noble out to gain advantage by whatever means necessary, a few more suspicious deaths would hardly have been noticed – but could have changed the face of history.