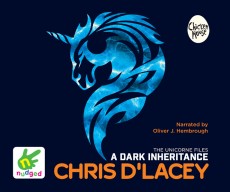 Rescuing a dog from almost certain death on a clifftop sets in train a series of events that turns teenager Michael Malone’s life upside down and promises to bring him closer to the truth behind the mysterious disappearance of his father three years ago.

There are times when I wonder how young adult crime fiction would survive without the staggering number of disappearing parents that abound in this sector. Examples that immediately spring to mind are Harlan Coben’s Mickey Bolitar series and Anne Cassidy’s The Murder Notebooks, both of which have kept me entertained on several long car journeys and to these can now be added The Dark Inheritance, billed as the first in a series called The Unicorne Files.

Michael Malone’s father disappeared three years ago, and hasn’t been seen since, casting a long shadow over his family but, along with his mother and his younger sister Josie, Michael just has to get on with life. Things take a distinctly surreal turn for him when, whilst he and his sister are being driven to school by their mum, he has a close encounter on a crumbling clifftop with a seemingly suicidal husky dog. Reality seems to have shifted in some subtle but very definite ways: his non-musical little sister can now play the flute, and everyone who witnessed the incident on the cliff swears that he moved faster than was possible.

Things take a more dramatic turn when Michael is approached by a shadowy and somewhat sinister organisation called Unicorne who promise him information on his father in return for carrying out some work for them. Michael knows he shouldn’t get involved with them, but he’s desperate to find out what really happened when his father never came back from a business trip, and so agrees to the deal.

After that, life is never going to be quite the same again, as Michael delves into the death of a young girl riding her bike on the lonely coast road and tries to work out what it is that ties her spirit to another girl in his school, as well as to the dog that set in motion the events that have turned his life upside down.

Oliver J Hembrough does an excellent job of providing an almost effortlessly age-appropriate narrator for the central character in this fast-paced and very engaging young adult thriller. A strong but never overwhelming dash of urban fantasy adds an extra dimension to the story but the whole somehow manages to stay both grounded and believable. I appear to have acquired yet another series…