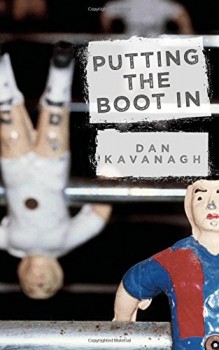 Putting the Boot In

Someone is trying to put third division team Athletic out of business. Private investigator Duffy is hired to find out why.

The third in Dan Kavanagh’s series sees Duffy, a bisexual ex-copper turned-private investigator, digging around in the somewhat murky world of third division football, where it appears that someone might be nobbling players.

Danny Matson, an up-and-coming young player, is attacked in a car park and his leg is broken. Jimmy Lister, a former player-turned-manager, is desperate to stop Athletic, one of the least glamorous teams in London, being relegated. They’re currently fourth from the bottom of the Third Division and are only hanging onto that position by their fingertips.

Athletic are under pressure in other ways, too. Local residents are after a court order preventing access to the ground from one of their entrances on match days, to keep problem behaviour away from their houses, but it’s nearly the end of the season and team boss Melvyn Prosser wants Duffy to find out who’s got it in for the team. Things go from bad to worse when one of the team’s star players comes in for a lot of racist abuse and then is accused of rape.

Duffy’s investigations seems a little haphazard, to say the least, but his interviews with disgruntled residents whilst attempting to pass himself off as a trainee reporter on the local paper are some of the most amusing scenes in the book. He uncovers some unpleasant neo-Nazis, but finds it difficult to get to the bottom of what’s going on, not least because Melvyn Prosser seems more than a little vague on the subject of whether anyone wants him out of business or not.

There’s a touch of Doug and Dinsdale Piranha about the villains in Putting the Boot In, for those who remember the Monty Python sketch about two brothers who used a combination of violence and sarcasm to devastating effect in the London underworld. No one actually gets their head nailed to a coffee table, but there were times when it seemed a possible outcome.

Duffy has problems of his own. He’s not always the sharpest knife in the drawer, but he’s persistent, something that doesn’t always go down well with a lot of people. On the pitch, playing for the Western Sunday Reliables, he worries about a lot of things, including the persistent niggle that he might be too short for a goalkeeper. Off the pitch, he’s obsessively examining his body for signs that he might have caught HIV, and wondering whether he ought to be a bit more cautious in his sexual liaisons.

The Duffy books, originally written in the1980s, are being reissued with no mention of the fact that Dan Kavanagh is in fact the pseudonym of author Julian Barnes. They’re very different from Barnes’ other work, but that doesn’t explain the desire for anonymity. The books certainly aren’t earth-shattering in any way, but they have a deep seam of wry humour suffusing Duffy’s antics, and his internal monologues are always good value.

I know absolutely nothing about football, but Putting the Boot In does remind me a lot of my late uncle’s lifelong love of Preston North End, no matter where they happened to be in the league tables. And there’s one very big plus about the book – no one attempts to explain the off side rule!