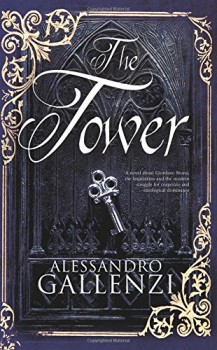 A giant tower in the desert will hold digitalized versions of all the world’s publications – including unpublished texts by the 16th century philosopher and genius Giordano Bruno. When those texts go missing, investigator Peter Sims and literary scholar, Giulia Ripetti are called in to find them. But someone is determined to stop them at any cost.

Missing manuscripts, an amoral multi-national corporation, conspiracy on conspiracy, the Catholic church? It all sounds familiar. Don’t worry – this is not a Dan Brown rip-off. It’s better by far.

Literary publisher, author and poet Alessandro Gallenzi, is not a name which springs to mind when you talk massive best-sellers. Possibly that’s because his beautifully crafted, immaculately researched and morally and intellectually challenging books are not blockbuster action adventures a la Da Vinci Code or even Kate Mosse’s brilliant, but slightly more sedate, Languedoc Trilogy.

Here he seamlessly melds two stories with a single theme. The wanderings and subsequent trial of Giordano Bruno, a renegade 16th century Dominican friar whose revolutionary cosmological thinking and writings saw him burnt at the stake by the Inquisition, are paralleled by a modern mystery centring on the suppression of free thinking and civil liberties. Gallenzi combines these narratives with an engaging skill in a deft, focussed and intensely readable story to make a convincing case for intellectual freedom.

Bruno remains to this day the subject of Vatican disagreement. Cardinal Giovanni Mercati, who in 1942 discovered lost documents relating to his trial, said the Church was justified in branding him a heretic. In 2000, on the 400th anniversary of his death, Cardinal Angelo Sodano declared it a ‘sad episode’, but defended the Inquisitors, but later that year Pope John Paul II apologised for the historical executions of ‘prominent philosophers and scientists.’ Bruno’s story is compelling – a maverick genius who dared to question the orthodoxy of Catholic teaching – and it is wonderfully told.

The modern section of the story is perhaps less convincing and its characters lack some of the authenticity and depth of their earlier counterparts.

A giant multi-national corporation is creating the world’s tallest building outside Amman, Jordan’s capital. As well as a commercial enterprise, it will also house a dramatic experiment to digitise every published work – a true fount of all knowledge in a 21st century Tower of Babel. But who exactly will control this knowledge?

When one of Bruno’s texts – hidden from the Inquisition – goes missing, investigator Peter Sims and literary scholar, Giulia Ripetti are called in. A Catholic priest, who had been translating the work, is found dead in mysterious circumstances and the two investigators both receive threats. This excellent thriller moves smoothly between the two eras as Peter and Giulia try to find what secrets the missing text may hide – and culminates in a compelling and clever showdown in the desert which proves that when it comes to control of thought, plus ca change, plus c’est le meme chose.

This is not an easy read, but it’s one that is well worth the effort.