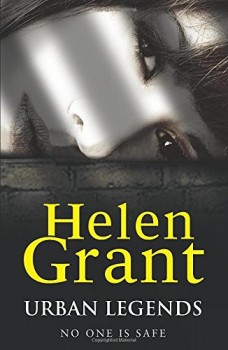 Veerle De Keyser is being hunted and she knows it. But how can a man who’s meant to have died first in prison and then in a fire at a ruined castle be in a position to threaten her now?

Urban Legends is the third and final part of Helen Grant’s young adult trilogy set in Belgium, which started with Silent Saturday and continued with the Demons of Ghent. The three books tell the story of teenager Veerle De Keyser and the other urban explorers she encounters during her illicit passion for exploring deserted, and in many cases dangerously decaying, buildings.

After a scarily close brush with death at the hands of child-killer Joren Sterckx, now calling himself De Jager - The Hunter - Veerle and her boyfriend Kris Verstraeten have gone their separate ways, with Veerle retuning to live in the home she’d previously shared with her late mother. Veerle has sworn to her father that she’ll have nothing more to do with Kris, but that proves a hard promise to keep when she starts receiving sinister text messages purporting to come from Gregory, one of their former urban explorer acquaintances.

Veerle is convinced that De Jager is back and that he wants revenge. She isn’t the only one who believes that, either. Kris Verstraeten believes that someone is coming after him and after getting the brush-off from the police, it seems that they’ll have to take matters into their own hands if they want to stay alive.

And Veerle is certain that De Jager is Joren Sterckx, regardless of the fact that the man she last saw carrying the blood-stained body of a dead child in his arms when she was no more than a child herself is said to have died of cancer in prison, years ago. But Veerle recognised the killer the night she and Kris nearly died, and his isn’t a face she would easily forget.

In this final part of her trilogy, Helen Grant’s writing lives up to its true promise. Gone are the frequent and somewhat cumbersome similes, leaving behind a sparser and stronger style, confident now without being flowery. Veerle has matured as well, now living alone and back at college, trying to remain on good terms with boyfriend Bram, even though her life is inextricably bound up with Kris Verstraeten’s.

The descriptions of secret places above and below ground are well-crafted and carry the unmistakeable stamp of authenticity that comes from good research and personal experience. The urban legends from which the book takes its name are suitably creepy, and I swear I was given bad dreams by at least one of these in my own childhood! This is a series I’m sorry to see end, but it’s also refreshing for a trilogy to mean exactly that, for a change.