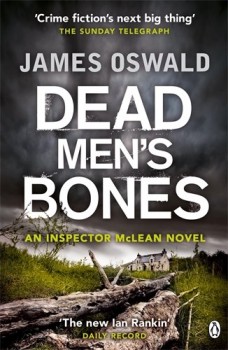 DI Tony McLean’s superiors are keen to tidy away the case of a prominent Scottish MP who murdered his wife and two daughters before killing himself, but McLean wants to get the bottom of what drove the man to murder and suicide.

Edinburgh DI Tony McLean is back for a fourth outing in James Oswald’s engaging police procedural series, which benefits from a smidgen of the supernatural thrown in to spice things up.

When the body of a prominent Scottish MP is found in the garden of his home in north east Fife, it seems an open-and-shut case. His wife and two daughters are inside the mansion, all dead. It seems that Andrew Weatherly drugged and smothered the two girls, shot his wife in the head and then went outside and turned the gun on himself. Apart from his own final moments, Weatherly’s actions were caught on security cameras in the house, so there’s no doubt about who carried out the murders.

For DI McLean, it’s not a question of who, but why. What drove the man to kill his family and then himself? Although his superiors are keen to wrap the investigation up quickly, someone else would rather McLean does a bit more digging. An envelope containing incriminating photographs of Weatherly is passed to him and then to the press, making it clear that he’s simply a pawn in someone else’s games.

Alongside his investigations into the murder-suicide, McLean also has to get to the bottom of why an ex-soldier who’s been living rough on the streets has turned up dead in a river not far from an old mental hospital, his entire body covered in fresh tattoos.

Anyone who’s followed Tony McLean’s previous cases will know that the man is a trouble-magnet with an unfortunate habit of winding up his superiors. But where Oswald scores heavily is that his characters are always capable of surprising you, and never descend into the over-used stereotype of maverick cop with a dark past and a problem with authority saddled with a blundering, unsympathetic boss. Yes, all those elements are here, but there’s something here that lift the books out of that all too well-worn rut.

Oswald has a very light touch with the supernatural elements, more like Phil Rickman’s excellent Merrily Watkins series rather than Stephen Leather’s depressingly over-done Jack Nightingale books. His mastery of sinister and creepy rather than full on woo-woo works well for me.

The long-suffering Detective Superintendent Duguid is back, and McLean is as much of a pain in the arse for him as ever, but Dagwood, as he’s known, has hidden depths and when push comes to shove, the man is capable of surprising even his maverick DI.

For me, the only slight misstep in the book is Oswald’s habit of using well-known names from the crime-writing world. I’d just about got used to DC Stuart McBride, but the appearance of Professor Matt Hilton, landed with the thankless task of trying to assess McLean’s mental state, was - for me - name-dropping taken too far. It came dangerously close at a couple of points of bouncing me out of the story, and that would have been a shame.

If you don’t know the series, this is as good a place as any to start. You can expect good characterisation and clever plots shot through with just enough supernatural elements to enable the books to very cleverly straddle the fine dividing line between police procedural and urban fantasy.