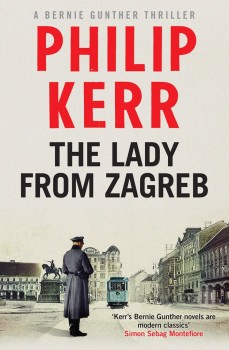 The Lady From Zagreb

Bernie Gunther’s reputation as a detective gets him a place as a speaker at an international police conference, and a private job looking into a company run by some important names.

In Hitler’s Germany, detective Bernie Gunther has no illusions about the atrocities and distortion of truth perpetrated by the state, and is less than politic in saying so. Only his usefulness to his superiors keeps him out of a concentration camp, or worse.

After a speech about his most famous case, Bernie is asked to investigate a company owned by important figures in the Nazi hierarchy, but later discovers the lawyer who commissioned the request bludgeoned to death. The facts about who was responsible, and why, only become clear about a year later when he is selected by Goebbels to find the father of an actress, and has to travel to Zagreb, and then to Zurich.

This is the tenth Bernie Gunther novel, but retains a spirit of vitality that makes it a pleasure to read. The sheer number of agencies with overlapping responsibilities make for confusion at times, but accurately reflect the competition within Nazi administration. The picture of life over two summers (1942 and 1943) is of a Germany increasingly under pressure but where the war is not yet irretrievably lost.

The two plots are woven well together. The first involves a mysterious company doing business with Switzerland, a connection that neither party wants to see publicised. The second concerns the glamorous actress Dalia Dresner, who ‘Joey’ Goebbels is keen to cast in a big Berlin film. Dresner makes it a condition that Goebbels helps locate her father, and so Gunther is sent to Yugoslavia to find him.

What Bernie finds there is a nightmare scene of death and depravity, where war has blown apart constraints and old scores are being settled with a vengeance. When he is unable to produce Dresner’s father, the actress joins her husband in Zurich, and Bernie is sent to persuade her to return. Gunther is sustained in his errands by the love he has developed for Dresner, which is fulsomely reciprocated.

Kerr manages to sustain a fine line between the horrors of wartime Europe, and Bernie’s cynical and humorous reaction to the human comedy he sees around him. His occasional spontaneous acts of mercy to the dispossessed show him willing to do as much as he can in circumstances beyond his control. The research is impressive without being too evident, and the action convincing, with the possible exception of the part where secret plans are concealed in a car exhaust pipe, something which is not to be recommended.