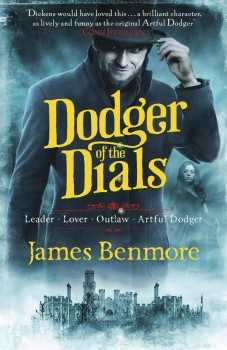 Dodger of the Dials

Jack Dawkins, the Artful Dodger, is making his living running what remains of Fagin’s gang of pickpockets and thieves. But he is forced to accept a junior partnership in a bigger and more brutal operation which leads him – and his mistress – into a situation where their lives are at risk.

Can you imagine Charles Dickens’ Artful Dodger as an early opponent of capital punishment on moral grounds: ‘It’s a barbarism’? No? You may find it easier to picture the prissy, holier-than-thou Oliver Twist, never my favourite Dickens character, as a middle class, leftish leaning, Guardian-style investigative journalist – much like his creator!

If you’re going to appreciate the second rumbustious adventure of Jack Dawkins in the criminal underworld of Victorian London, you’d better get used to both ideas.

When James Benmore launched Jack on an unsuspecting public last year I had real doubts anyone could pick up where the Master left off and realistically recreate both the characters and the settings.

He succeeded brilliantly – and this second story is even better, developing the likeable rogue into a far more rounded and sympathetic character while keeping up the pace of his adventures and also posing a series of moral questions.

Briefly, the Dodger is back in London, making his living running what remains of Fagin’s gang of pickpockets and thieves. But the face of Victorian crime is changing and he is forced to accept a junior partnership in a bigger and more brutal operation.

That decision leads him – and his mistress – into a situation where their lives are at risk as Jack is comprehensively stitched up for murder and the lovely Lily kidnapped by the vicious thug who was once her procurer.

Jack, the devil-may-care Cockney flash boy, narrates – and his perfectly rendered grammatical idiosyncrasies leap off the page so you can really hear his voice. The action races along, the crimes, the gangs and their Sawyers – leaders – but the catalyst of the story is the descriptions of the appalling conditions in Newgate Prison and the effects on its inmates.

It’s all highly improbable – and tremendous fun – with an underlying theme which is deadly serious when dealing with a society which hid a wide streak of immorality, corruption and viciousness beneath its staid and proper exterior image.

Jack’s reunion with Oliver – still prissy – is emotive and cathartic. I like to think the campaigning journalist, social reformer and brilliant writer would have raised a wry smile and occasional chuckle at the work of his modern imitator and successor.