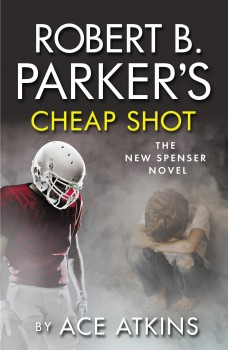 Spenser is hired to find a nine-year-old kidnap victim amidst gang violence in downtown Boston.

Spenser is back, with Ace Atkins once again picking up where Robert B Parker left off. Continuing someone else’s work is always a potentially dodgy enterprise as fans of both Jane Austin and PD James discovered to their cost when the much-hyped Death Comes To Pemberley appeared.

In Cheap Shot, Kinjo Heywood is one of the brightest stars of the New England Patriots. He’s a tough linebacker who has just signed a 10 million dollar deal, putting him in the limelight. But everything comes at a cost, as Kinjo discovers when his nine-year-old son, Akira, is kidnapped.

While Kinjo waits anxiously for a ransom demand, he spends his time being pulled apart by his ex-wife Nicole and current wife Cristal, and to make matters worse, there’s a suspicion that his past, in the shape of a nightclub shooting from two years ago, might be coming back to haunt him.

What no one has yet dared tell Kinjo is that in only 50 per cent of cases is the hostage returned alive. When he discovers that, things become very dangerous indeed.

After reading Wonderland, I described Atkins as a safe pair of hands, but now I’d go much further than that. Cheap Shot took me straight back to the world of vintage Spenser at his best, before his creator adopted a style so stripped of essentials as to become almost unreadable, caught up as he was in his own deep love affair with Susan Silverman, the character who polarises fans of the books more than any other.

Yes, Silverman does appear, but there’s none of the irritating affectations like the sparrow-sized mouthfuls of food and the over-emphasis on her as the archetypal Jewish American Princess that used to get on my last nerve every time she appeared. Here she’s back to being a shrink, capable of getting involved and even adding value to Spenser’s investigations, and I found myself almost liking her again, something I haven’t done for a very long time.

In Spenser’s last outing, I wondered how the laconic and dangerously attractive Hawk would fair at Atkins’ hands. Cheap Shot answers that question with aplomb. Hawk is as sharp, stylish and lethal as he ever was. Boston’s gangs are as dangerous as ever, Tony Marcus, dressed in a canary yellow suit is still pimping, Marty Quirk still regards Spenser as a king-sized pain in the ass, and all is well with the world. This is quality writing, and puts Spenser and friends firmly back on their pedestal.