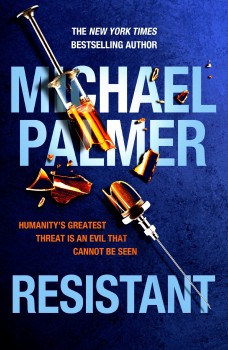 An aggressive new infection is sweeping America’s hospitals, the product of a shadowy terrorist organisation. When Dr Lou Welcome’s friend succumbs, can he find the cure, find the terrorists and save his friend’s life?

The Society of One Hundred Neighbours is a shadowy organisation dedicated to forcing the American government to rescind all social security and welfare payments in the belief that it will result in a stronger, more prosperous economy. It is made up of 100 citizens, all in prominent or professional positions where they can exert influence. They have created a superbug, an aggressive bacterial strain that is resistant to all antibiotics except for a particular combination known only to its creators. The bacteria have then been quietly introduced into several hospitals across the country.

The plan is that once there are a significant number of cases, the government will be held to ransom in return for the cure. Unfortunately, before the Society has a chance to make its demands, the bacteria have mutated and the original cure no longer works. Both the terrorists and the government are desperate to find a cure for the infection, but to no avail.

When Dr Lou Welcome attends a medical conference in Atlanta with his friend and training buddy, Cap Duncan, he is not worrying about superbugs, but while out running in the mountains, Cap falls and suffers a compound fracture of his femur. With a near superhuman effort, Lou brings Cap out alive, only for him to fall victim to a hospital-acquired infection with the deadly bacteria.

In order to re-establish their leverage with the government, the Society is desperate to find a new cure. The government has also established a virtual team of scientists to work on the problem. When the leader of the team is kidnapped, Lou must use every resource available to him to find a cure, rescue the kidnapped microbiologist and save his friend’s life.

For anyone who enjoys a medical puzzle, this is a fascinating book. The descriptions of hospital and medical procedures are all completely believable, although the microbiologists seem surprised that Lou, with a medical degree, would understand bacteriology, something he would have studied extensively in the pre-clinical parts of his degree.

There was one small but annoying point; the author consistently uses ‘bacteria’ to refer to a single organism where ‘bacterium’ would be correct. While accepting that this is becoming common usage, I found it very irritating and surprising from an author with a medical background.

The quotes from the writings of the fictional Lancaster R Hill, on which the Society of One Hundred Neighbours bases its beliefs, are well written and resonate with the style of their period. I wonder what the Society would have made of the NHS!

Overall, the characterisations could be stronger but the medical detail is excellent. Resistant is well worth a read so long as you have a fairly strong stomach!