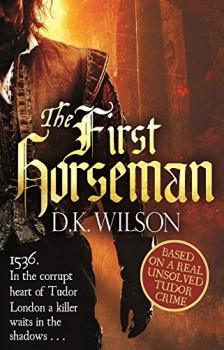 House of Commons member Robert Packington became the first man in London to be murdered with a pistol when he was shot dead while walking to Mass.Thomas Treviot, a close family friend, sets out to investigate his killing amid the corruption and conspiracies of Henry VIII’s court.

Eminent Tudor historian DK Wilson makes a spectacular debut as a crime writer on the back of the old adage: write about what you know.

He has it all to hand. An expert in his own sphere, the first-class storyteller of a string of TV shows, a fine writer of non-fiction works – and an almost endless supply of plots, conspirators, low-lifes, religious bigots and ambitious upstarts from the febrile court of Henry VIII after the execution of Anne Boleyn and the start of Thomas Cromwell’s destruction of the monasteries.

At the start of what promises to be a long series – there were enough unexplained deaths and disappearances in the period to make War and Peace look like a couple of short paragraphs – leading mercer and Member of the House of Commons Robert Packington is shot dead on his way to early Mass on a foggy November morning in 1536. The killing, the first in London using a handgun, shocked the city – and in reality was never solved.

Wilson has hot-headed young goldsmith Thomas Teviot befriended by the dead man, who he regards as an uncle. Putting aside his crushing grief over the deaths of his father and his own young wife, he sets out to track Packington’s killer.

That quest leads him from the brothels of Southwark to the Tudor court, from violent men who will contract a killing for a few pounds to devious, ambitious and greedy men who will happily pay that price either in the name of personal gain or religion. It also takes him deep into a conspiracy that threatens his own life – and that of his friends.

This book is far above the ordinary Reformation romp. So many of the characters are real people, all of whom played a part in shaping and re-shaping the history of England, that it is hard to tell where fact leaves off and fiction begins as they are blended so seamlessly.

Wilson’s characters, from palace to gutter, are wonderfully well-rounded – a mix of moral aspiration and low ambition, faith and commerce, personal choice and political manoeuvre. The plot is devilishly ingenious with some unexpected twists matched by authentic dialogue.

The result is a portrait of Tudor England that rings horribly true, which not only offers a believable explanation for major historical events, but is also a cracking good read. This brilliant interpretation could well be closer to the truth than accepted versions of a volatile and sketchily documented age.