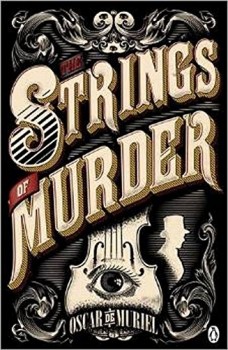 The Strings of Murder

Victorian Inspectors Ian Frey and ‘Nine Nails’ McGray must solve the gruesome killing of an Edinburgh violin virtuoso. Their inquiries take them into a world of music, madness and devil worship.

This first book in what is rumoured to be a new series featuring Victorian Inspectors Frey and ‘Nine Nails’ McGray is one of the best debuts so far this year. If Oscar de Muriel can keep up this brilliant mix of horror, history, science and humour, these unlikely buddies could become a cult fixture in the genre.

The Mexican-born, Manchester-based author, is also a translator, chemist and violinist and uses his varied and considerable skills to produce a genuinely riveting piece of Tartan noir, which will leave you wanting more.

Following the first rule of ‘buddy’ stories, his two main characters are diametric opposites. Inspector Ian Frey, the narrator, is the product of a posh, professional London family. He mixes in the right circles and knows exactly the right clothes to wear for every occasion. He has started – and abandoned – an Oxford career in medicine and another in law at Cambridge, but has found his true place in the detective ranks at Scotland Yard.

In 1888, national panic over the Jack The Ripper murders prompts a change in police hierarchy, and with his mentor removed, Frey is out of a job. But his fame for catching a serial murderess saves him and he is sent to Edinburgh to investigate the gruesome and baffling killing of a violin virtuoso which bears all the hallmarks of a Ripper imitator. There he meets Inspector Adolphus McGray, a rough, tough, Scot, with a tragic family background and a predilection for both violence and a belief in the supernatural.

Naturally, dislike is immediate. Frey thinks McGray an idiot and Scotland absolutely barbaric. McGray thinks him another soft Southerner and proceeds to insult him on every possible occasion. The exchanges between the two are very real, often genuinely funny, and slowly build into a relationship of spiky respect as they hunt the perpetrator of several connected and gruesome murders.

With plenty of twists, a good strong and sustained plot featuring the occult, devil worship, a clairvoyant, madness, an impossible puzzle rooted in musical legend and an atmosphere of creeping horror, this will keep you turning pages right to its bizarre and spectacular denouement.

If you can solve what looks like a simple locked room mystery for the first killing, then discover the motive, or method, behind a series of murders, some more macabre than others, you should be writing the follow-up, not reading this!

The solid placement of the story in the world of violins, virtuosos and the neo-Gothic legends that surround Tartini’s Devil’s Trill Sonata and the great instrumentalist Paganini gives the story an unusual slant.

Are the mismatched pair of detectives looking for a real person or the Devil himself? It’s clever, occasionally frightening and superbly written. Even the bit-part characters assume a life of their own, Edinburgh in the early winter provides a suitably chilling and beautifully portrayed setting, and the end, when it comes, is a perfectly logical scientific explanation. The Strings of Murder is everything you need in a mystery thriller.