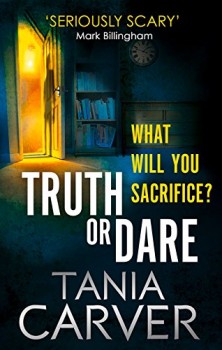 A kidnapped man is given a choice: save his life or that of his girlfriend and baby. What decision will he make?

I know this is probably going to sound odd, but I always feel like I’ve somehow got off on the wrong foot with a book when I know the author is writing under a pseudonym, as Martyn Waites is with the DI Phil Brennan series, put out under the name of Tania Carver. I think it’s because I always feel rather odd referring to them by the assumed name in a review. That aside, I’ve pretty much read the series from the beginning, and it’s now up to number six.

Carver’s speciality is twisted killers, and that’s not normally a sandpit that I particularly like to play in, but these are done well enough to keep drawing me back.

Brennan is still working in Birmingham, but his other half, psychologist Marina Esposito, is back in their old stamping grounds in Colchester, having been asked to prepare an assessment on the mental state of a sex-addicted woman with learning difficulties who disposes of any unwanted children by simply burying them alive.

At the same time, Marina has to contend with a deeply manipulative woman in the same detention facility who calls herself Fiona Welch. The only problem with that is that Phil Brennan saw Fiona Welch die.

Back in Birmingham, Brennan is faced with a masked killer who’s decided to dispense his own brand of justice by tying a man to a chair, opposite his girlfriend and baby daughter, and giving him a simple choice. He dies or they do. Darren Richards isn’t big on chivalry, and he’s already taken two lives when drove a car he’d nicked whilst high on drugs into a woman and her baby. So in the killer’s eyes, this is Richards’ chance to redeem himself. It’s not giving much away to say that Darren Richards doesn’t take long to make his decision.

Phil Brennan is something of an oddity in crime fiction. He’s a decent bloke (yes, he’s had quite a few dark episodes in his own past, but that’s pretty much obligatory), who isn’t playing away, on the take, addicted to booze of drugs or constantly at loggerheads with his boss or the rest of the team. He even does his best to get on with DS Ian Sperring, a bloke who would have been quite at home in the good old days of The Sweeney.

The supporting characters are good as well, from downtrodden prostitute Letisha Watson, Darren Sperring’s ex-girlfriend, to Moses Heap, an ex-gangsta who managed to broker a truce between two of Manchester’s warring gangs. Carver does a good job of staying away from stereotypes, except perhaps when dealing with the killer and it’s hard not to like Brennan and his team. Even Marina Esposito, who’s always seemed a bit lacking in personality in the previous books, starts to come alive, and I was soon as caught up in her plot-strand as I was in the hunt for the killer known as The Lawgiver.

You don’t need much of the backstory to follow what’s going on, so if you’re not familiar with the series and have a liking for serial killers and all that entails, this is definitely one for you. Even if you don’t, I’d still give Truth or Dare a try.