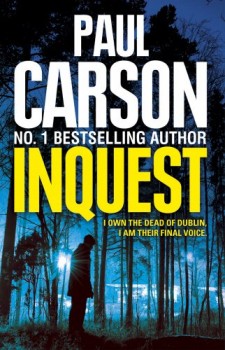 Coroner Dr Mike Wilson is dragged into a morass of corruption and killing as he conducts an inquest into the apparent suicide of the drug-addicted son of a government minister.

Coroners I came across in many years as a crime reporter were invariably men of great legal or medical experience, often both. But none matched ex-pathologist Mike Wilson, the troubled, but bloody-minded, hero of Carson’s latest fast-moving, hard-hitting, slice of Irish life and death.

Wilson, newly-appointed Dublin City coroner, is a man with a troubled past. As a 12-year-old he escaped when his parents were murdered by the IRA, but the killings left him psychological scarred. The self-sufficient loner has found love and is devoted to his wife and family. He is also devoted to his job and obsessed with seeing that the often sad cases which come before his court receive the best final service they can, so that their ghosts, whose presence he feels, can be laid to rest.

When another coroner is shot dead, many of his cases land on Mike’s desk. The dead man had doubts about the apparent suicide of a government minister’s drug-addicted son and made notes on the file. Mike shares those doubts, but as soon as he begins to investigate, he too becomes the target of a bomb attempt. With the aid of a determined female detective, he continues, but then he and his family are attacked. He plunges into a morass of governmental and police corruption, drugs dealing and killings all set against an Ireland plunging into unemployment and bankruptcy as the artificially-inflated Celtic Tiger economy, largely founded on speculation, collapses.

This is an outstanding thriller with believable action on almost every page and a brutal and explosive denouement. It is also a brilliant dissection of causes of the failed Irish dream – and the consequences. And as a depiction of family life and the problems of dealing with growing children, it’s superb – at times quite touching – as the suspicious and bloody-minded loner comes to realise just what is at risk and tries to balance that with his duty and conscience.

Carson is not as widely known on the English side of the Irish Sea as he should be. This is a first class, old-fashioned thriller tailored to a modern setting – a far better and more convincing read than many of the American trash-thrillers now flooding the market. I’ll certainly be looking for his earlier books.