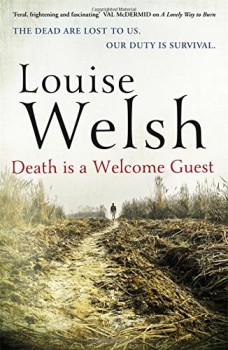 Death is a Welcome Guest

Magnus McFall is in prison on remand for a crime he didn’t commit. Around him, men start dying like flies – and it’s no better outside the prison walls either, as Malcolm soon finds out.

A Lovely Way To Burn, the first in Louise Welsh’s apocalyptic Plague Times trilogy, more than lived up to its promise, so when Death is a Welcome Guest arrived on the mat, it promptly jumped to the top of my reading pile and I certainly wasn’t disappointed.

If you’re a fan of the BBC series, Survivors, either Terry Nation’s thoroughly gripping original from the 1970s or Adrian Hodges’ extremely creditable reimagining of a few years ago, then this is a series you mustn’t miss. The books can be read in either order or as standalones, so by all means start here and then go back to the beginning.

Magnus McFall earns his living as a comedian, but there’s nothing funny about ending up on remand in prison for a crime he didn’t commit. He’s accused of assaulting a woman when in fact all he was trying to do was help her. His cell mate, the taciturn Jeb Soames, is unimpressed by Malcolm’s protestations of innocence, and when inmates and prison officers start dying like flies, Magnus is faced with a stark choice: throw his lot in with Jeb and make a break for freedom, even if it means turning to violence, or take his chances and stay behind. And it’s soon clear that any VP – vulnerable prisoners – aren’t exactly popular with their fellow inmates.

Welsh presents a brutal picture of life both inside and outside the prison. Thousands lie dead or dying in the streets, and martial law is in full force, mainly to protect property rather than people, but even that’s a lost cause. Once the Sweats, as the mystery illness has been dubbed by the press, takes hold you mostly have two chances: fat chance and no chance. But a few people like Magnus and Jeb do pull through. Reluctant allies, the two men make their way out of London, ending up with a small, struggling community out in the countryside.

Magnus’ farming background makes him a valuable commodity, but Jeb Soames’ past catches up with him, and he’s viewed with suspicion that turns quickly into hostility when one of the small group is murdered.

Death is a Welcome Guest is a bleak, no holds barred look at a rapidly-disintegrating society, slipping inexorably back into the sort of devastation last seen in the 14th century when the Black Death cut a swathe across Europe, leaving millions dead. Like the first in the trilogy, this book poses the question as to whether one more death amongst a host of others has any meaning, and Malcolm has to make his own mind up about that. With the threat of the ebola virus a constant companion these days in the media, the book makes uncomfortable but always wholly engrossing reading. This is post-apocalyptic story-telling at its very best.