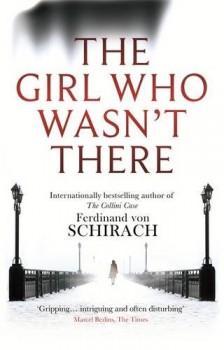 The Girl Who Wasn't There

Artist Sebastian von Eschburg is arrested for a murder of a girl, although no body has been found, and the victim can’t be identified.

Sebastian von Eschburg is the product of a rich but dysfunctional family: a fond but inadequate father and an indifferent mother. Key incidents in his childhood haunt his thinking, and he has difficulty relating to others.

He is unusual also in that in addition to the normal ability for colour recognition he perceives an infinity of subtle shades in the world around him, an emotional resonance. It is this sensitivity that no doubt contributes to his development as a photographer and artist, which quickly brings him fame and fortune.

He meets a neighbour, Senja Finks, who relates a story of a Ukrainian gang who force girls into prostitution, a gang who is seeking to recover money she stole from them. Sebastian defends Senja from an attack and ends up in hospital. Shortly afterwards Sebastian is in custody, accused of murder.

This is an unusual crime novel, if indeed it can be so called. More than half the book is taken up with the life of the protagonist before the crime occurs. While this character portrait is compelling, some of the description of Sebastian’s internal dialogue almost suggests autism, whereas he is said to have no difficulty in establishing sexual relationships, albeit fairly short-lived. Occasionally his experiences are indicated after the event to be figments of his imagination. All this makes it difficult to get a clear picture of the man.

Once Sebastian is incarcerated, the focus shifts to Monika Landau, the prosecutor, and Konrad Biegler, the defence lawyer requested by Sebastian. On the prosecution side the main area of interest is the means used by the police to extract a confession, and Landau’s reaction to it; this is explored in detail when the case comes to court. As to the defence, Biegler is given a number of pages to establish himself, a man with the right instincts but showing signs of great stress.

To say too much more would deprive readers of the thrill of the reveal, but it would hardly be invidious to point out that the police case, as stated in the opening sentence to this review and indeed in the title to the book, does look to be spectacularly flawed. Whatever other points of interest the book has, this difficulty is something that some readers will find impossible to overlook.

Von Schirach constructs a compelling tale, with skilful use of gaps and omissions to add interest to the linear narrative. He does perhaps lose his way in the second half of the book: the dilation on Biegler and his problems seems rather gratuitous and somewhat of an indulgence, and most fatally, the mainspring of the story is unseated by a fundamental weakness in the plot.