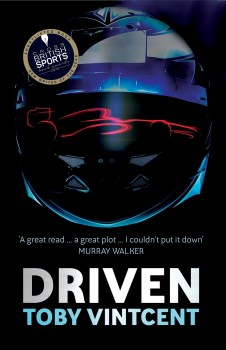 Former Royal Marine Colonel Matt Straker is brought in to investigate a possible case of deliberate sabotage within the glamorous but cut-throat world of Formula 1 racing.

The Ptarmigan racing team have come back from the brink of financial disaster and are close to making Formula 1 history. They’re running a woman as their number 1 driver and unlike any other women in the history of the fiercely macho competitive sport, Remy Sabatino looks like she might actually manage to win the drivers’ championship as well as securing constructors’ victory for her team. But not everyone is smiling on their good fortune.

When Remy’s radio feed goes wrong during practice for Monaco Grand Prix, Matt becomes suspicious and suspects sabotage. Someone has been listening in to the radio communications and, more drastically, jamming their transmissions, preventing vital information reaching Remy. Then the Ptarmigan number two driver is involved in a massive and nearly fatal crash and sabotage is suspected.

Former Royal Marine Colonel Matt Straker, corporate intelligence director of Quartech International, the company that stepped in to save Ptarmigan from ruin, has been brought in to ensure that nothing is allowed to go wrong while the team is courting one of the biggest sponsorship deals of all time.

But not everyone in motor racing is enamoured of Ptarmigan’s success, or of Remy Sabatino. The boss of rival team Masserella has been very vocal in his opposition to a woman in the sport and the rivalry between the two teams is intense, both on the track and off it.

Toby Vintcent does an excellent job of portraying Formula 1, and if today’s races were anywhere near as exciting and entertaining as the ones he describes, I might actually go back to watching races properly, rather than having them on as moving wallpaper while I read a book or do something else! His description of wheel to wheel action on the track reminds me of Schumacher at his best – and worst – and like the racing scenes, the action as a whole rarely flags.

In many ways, the behind the scenes political in-fighting between the teams in F1 has always been as entertaining as the races themselves and Vintcent is pitch-perfect in that regard as well. His fictional bosses always ring true, never descending into caricature, and the same is true of the drivers and the teams themselves. He skilfully mixes fact and fiction, and the description of the fictional London Grand Prix is every bit as gripping as the white-knuckle rides around familiar circuits such as Monaco and Spa-Francorchamps.

This is a fast-paced (yes, I have to be allowed one predictable cliché!), eminently believable thriller that will appeal to anyone who likes Formula 1 and who longs for the good old days when overtaking was the norm and the sport was still interesting.