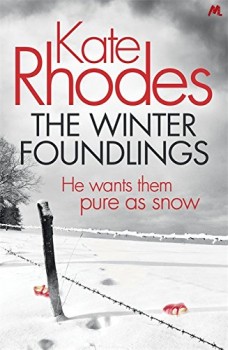 Psychologist Alice Quentin is doing research at a high security hospital, when a copycat killer begins kidnapping and murdering young girls – apparently in tribute to a prolific child killer who is a patient there. Alice must establish a relationship with the charismatic killer to find the link to these new murders.

In psychologist Alice Quentin, Kate Rhodes has created a multi-layered and fascinating heroine who is both intelligent and damaged. This complex, but totally believable character, has issues with relationships and men, but shows sheer guts in putting experiences which would destroy a lesser person behind her and in her commitment to her job.

The Winter Foundlings is the third book in the series, and it’s intense, compelling and convincing. Rhodes’ powerful, pacy prose and excellent use of both settings and imagery draws the reader into the plot and keeps them riveted.

Quentin is on a six-month secondment to a high security hospital looking at the care and treatment of some of Britain’s scariest criminals. DCI Don Burns, with whom she already has a professional relationship from earlier books – and hopes for a more personal one – wants her to interview the country’s most prolific child killer to help in finding a copycat murderer apparently devoted to carrying on his ghastly spree.

Four girls have disappeared in North London. Three are dead. Quentin must somehow communicate with a deranged and charismatic killer who rarely speaks and discover how he appears to be conducting the killings although he has no contact without the outside world.

This is psychological thriller writing at its best – an evocative read which draws you in and holds your attention all the way. Quentin is so much the focus of the story that even her sketchy love life seems important, and the supporting characters – Burns, her glory-hungry former tutor, staff at the hospital and police – are all well drawn and realistic.

The book has obviously been researched in depth and Rhodes’ descriptions of the maximum security hospital and some of its patients so realistic that anyone who has ever been inside one will recognise the strange artificiality of life behind locked doors and barred windows – and those who haven’t will never need to such is the authenticity of the atmosphere.

But Rhodes’ great strength is her characterisation. The manipulative villain, a chilling and often quite terrifying presence on a par with Hannibal Lector, projects an aura of real evil and Alice’s reaction to him is brilliantly portrayed.

If you’ve read the first two books, this is, perhaps, even better. If you haven’t, the claustrophobic, snowy setting combines with a creepy psychiatric story to produce a great stand-alone with enough references to Alice’s last outing to allow easy understanding.