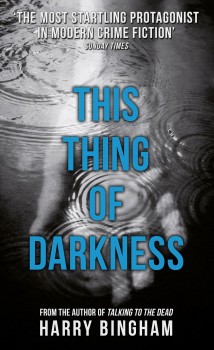 This Thing of Darkness

Welsh DC Fiona Griffiths suffers from Cotard’s sydrome, a rare but serious condition in which depression and psychosis bring about a form of depersonalisation – sufferers often believe they are dead. Early childhood trauma is frequently the spark and suicide often the result.

As much of this fascinating series is taken up with her attempts to become part of the ‘normal’ world as with her crime solving. But it is her ability to stretch beyond normal which makes her such a fine detective as well as genuine maverick, held together only by her love of the law she works so relentlessly to enforce.

This intelligent, although profoundly damaged character, is portrayed with great psychological depth, although without ever being entirely dark. She is also a strong and determined woman searching for her own identity in a tide of darkness.

In a bid to fit better into the hierarchical structure of the police force, she accepts a job as an exhibits officer, a vital, but boring task – as she describes it, ‘a librarian of crime’. To keep her mind active and the darkness at bay, she also takes on three completely baffling cold cases, two of which involve violent deaths.

The cases are a clifftop accident, an unexplained tragedy and a totally impossible burglary, which later sees all the stolen items returned. There’s absolutely nothing to connect them, but Fiona’s strange senses tell her there are invisible threads linking all three. As she investigates further, she starts to uncover the outlines of a vast and unlikely conspiracy to steal literally billions of pounds by interfering with the nano-second transmissions of information which drive the world of international finance.

Given the recent LIBOR scandal, the plot is as up to date as any you can find and brilliantly stretched over rock climbing, kidnap and torture to a thrilling climax in a force ten gale off the Irish coast. And Bingham somehow manages at the same time to set up Fiona’s next investigation.

All the characters are convincingly real, particularly Fiona’s police superiors, and Bingham enlivens them with some wry asides, such as why do Welshmen need to hit things when they are excited or pressed?

But it is the ever-curious, near sociopath Fiona who holds it all together. This combination of uncertainty, bravado, disregard for authority, extreme organisational ability, a willingness to put her own life on the line to gain justice for her dead ‘friends’, depression and insight, provides one of the most interesting and riveting detectives in modern crime fiction.